Clearly I'm talking about the Conclave at St. Peter's and not the Tigers. I don't even know when opening day for them is! Gasp, I know.

Today in the Catholic world it was a mix between the Oscar Red Carpet and Super Tuesday/Presidential election night. There was a lot of "oh, look! There's Cardinal [insert name here]!" and even more speculation about front runners and favorable candidates. Let's be honest. Many Catholics have their favorite hopeful, and for many US Catholics it veers between Cardinal Dolan (Archbishop of New York & President of the United States Conference of Catholic Bishops) and Cardinal O'Malley (Archbishop of Boston). Catholics really in the know have their favorites from the larger Catholic world too (I've heard whispers of Cardinal Turkson of Ghana, Cardinal Tagle of the Philippines, Cardinal Scola from Milan, and the list goes on).

While it has been fascinating to learn about the history of the conclave and the different men most likely "in the running," I tend to find all the speculation (beyond simple hopeful conjecture) to be odd. It reeks a bit too much of every other election and award we are used to in the United States. We can certainly put our opinions and analysis out there, but there's only one who knows in the end, right? It's not any news anchor or reporter or church insider of the human variety - I'm putting my money on the Holy Spirit to do what's needed. After all, while we may be right in our assumptions, his ways are not our ways and his thoughts are not our thoughts (cf Isaiah 55:8). Even if we guess the person to be elected correctly, we don't know what his pontificate will bring, much like Pope John XXIII. You can read up on his papacy here - http://www.ewtn.com/piusix_johnxxiii/johnxxiii_history.htm (sorry I can't hyperlink on the app as far as I know).

The fact that I'm writing any of this at all betrays my own church nerdiness and addiction to needing to know the latest scoop. In 2005 during the Conclave that elected Pope Benedict XVI, I hadn't yet started fully working in ministry. I was peripherally involved, so I had no idea of the conjecture or possible front runners. I'm not sure which way I prefer it, to be honest. I do kind of like knowing who the main players might be (there is also a part of me that hopes a little that we will be surprised). I just don't enjoy the nonstop analysis, I suppose.

We are most definitely on Popewatch here, though. Our prayers are united with the Cardinals. May the Holy Spirit grant them wisdom and knowledge to discern our new shepherd, and for this Mama who struggles with patience, may it be by the third vote!

Bring on the white smoke!! 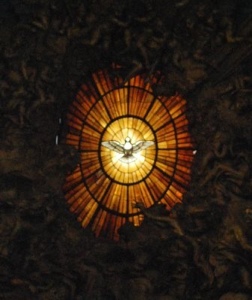