Today was one of those mornings...no, not THOSE mornings! We actually had a peaceful, mostly organized, chaos free morning getting up and ready to go to Mass. Kids were dressed and fed with time to spare. Parents were dressed and fed with plenty of time. Cats stayed out of the way mostly. We got everyone packed up and out of the house on time. That NEVER happens. Now we know why.
Since the Hubs and I had split Masses last weekend, neither of us ended up at our parish, but hit a couple Masses closer to our house. Why is this important, you ask? Well, let me tell you. We go to a Slovak Catholic parish, which has a Slovak Mass right after our usual 9:30 AM Mass. The only exception is on days of celebration or certain feast days. Today is not a feast day, sure. It was, however, the Mass of Thanksgiving for a newly ordained priest. On those occasions, they combine the Masses...at 10AM. Not 9:30, 10. We did NOT get that memo. Being early for the 9:30 Mass, we could not anticipate a pleasant morning of waiting over a half hour for a longer Mass to start.
Like slugs in the night, we crawled out the back door of the church hoping to go unseen and headed to breakfast before going to a Mass later in the morning. Yes, we were THOSE people. We ended up going to Mass at our "B" parish, which is under renovation, so it is held in the chapel/cafeteria of the high school where the Hubs works. Gigi was thrilled to go to daddy's school, but the environment did not lend itself to a quiet Gigi. Little man is now more active too, so he had no intention of staying in his carseat for another hour or so. Mass chaos.
What grades did they get? It depends on who you ask! Mama gave Li'l G a C- for screaming, talking, flailing and other such nonsense. Daddy worked his magic and added in some extra credit (she DID stop at the Mary statue as we skulked out of our normal parish to say a Hail Mary) and graded on a curve due to location and circumstances to bump her up to a B- which means she still gets to go play at the park. I think daddy wants to play at the park.
Judah earns an B+ for some outbursts and a little hitting, but he did eventually fall asleep, which as we previously agreed, earns bonus points at this age. Besides, when he hits and you tell him no, he makes the funniest fake crying face ever! One day I will get a photo of it...maybe.
Here's what I wore: 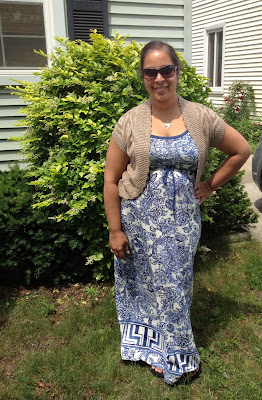 Dress: Target
Sweater: Meijer
Shoes: standard sandals
Sunglasses: Target (no, I didn't wear those in Mass!)
Jewelry: Usual trifecta of medals/crucifix
Rosie over at A Blog for My Mom was writing the other day about mom fashion and style, and has posed a challenge to herself (and extended it to others) to go pantless. Proponents of No Pants Day will be thrilled! Though I don't think I could manage to don dresses and skirts every day, I too agree that it is overall far more comfortable and flattering to a growing/changing post-partum body that doesn't seem to want to go back to its original pre-baby shape. It also pays homage to my little girl days where I never wanted to wear pants. In light of that, I'll be joining her for this challenge in part - most importantly the challenge to get out of the pajama and yoga pants and get myself dressed for the day before the kids. There may be an occasional pajama day thrown in from time to time, of course. We shall see how it goes!
Speaking of little girls, here are a few glimpses of our crazy Li'l G in a calmer, restful state. I still suggest you not feed the animals....
Update & Bonus: What the The Judester Wore, now that he is up from his nap.
For more Mass fashions, visit the ladies at Fine Linen and Purple! They're challenging us this week to connect with three ladies we don't know by reading and commenting on their What I Wore Sunday links. Join in the fun, won't you?

Here's hoping your Sunday is chaos free and your week filled with every blessing! 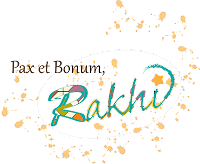