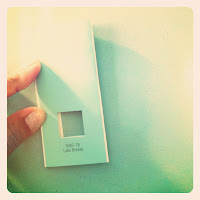 Bathroom remodel. That's right - the time has finally come upon us. Right after the little man's birthday party and while mom is visiting from Oregon. Did I mention we only have the one bathroom? No? Well, we do, so we have had to relocate to Tim's mom's (who has been overly generous in housing the whole brood) for the week. 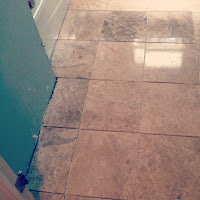 While mom is visiting, she usually just crashes at the house, so this means that she too is over at the ranch. So there are pick ups, drop offs, running off to the house under constructions, mixed in with a hectic work schedule as we are trying to hire a new staff person to start next week. That's why the posting is coming at a duskly hour. Must stay focused on the light at the end of this long tunnel. NEW BATHROOM! Incidentally, the wall color we picked looks an awful lot like the color of the unfinished bathroom drywall. Great way to get an idea what it will all look like!
TWO: 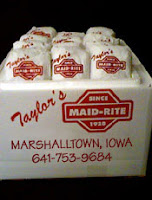 All this chaos means that initial plans, however loose they were, to go back for my sort-of-20th high school reunion were scratched (I went through school with this class, but graduated a year early). While I'm glad we aren't trying to squeeze all that in with everything going on, I am a little disappointed, despite my initial reservations, that we will not be heading back to Marshalltown. It would have been nice to see people in person rather than on a screen and be able to catch up with old friends. Here's hoping they all have a blast and allow me to live vicariously through their pictures. Have a Made Rite and climb the Roundhouse for me, mmkay? Thanks. Hoping to make it back one of these years... 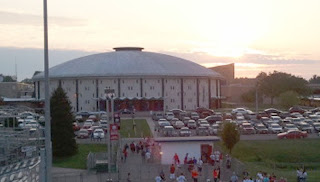 THREE:
I didn't realize there were still parks left with metal equipment. While it makes for a toasty tushy in the midst of the summer sun, on a cool evening, it's a nice walk (or slide) down memory lane. Li'l G loves loves loves her parks. Every park has a name, though it is rarely the one it is actually given. There is red park, green park, orange park, yellow park, spider park, baby park, and now...middle school park. This was at the park behind the middle school the Hubs went to. Confused? So was I until he explained there was an elementary school right next door, so it is not a bunch of preteens hanging out on the swings. 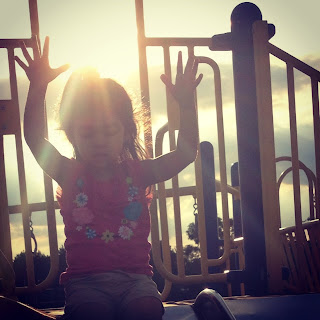 FOUR:
I like to call this segment the "when famous people have babies" segment. Anyone who has been pregnant and given birth knows that people lose their damn minds as it relates to what is appropriate to say and do. Why on God's green earth do you think it is acceptable for you to touch my belly, simply because there is a person inside there (don't even get me started on the "if it is a clump of cells why are you touching me?")?? And no, I'm not actually birthing a litter, I AM that big, and I DO have three more months to go, thank you. Well, add in the celebrity factor and such nitwits take to the airwaves! Do we really need to dissect on the air if Prince George will be breastfed? I mean, isn't that up to his mom? And did you seriously just speculate on air whether Kate would ever lose her baby weight...THE DAY AFTER SHE GAVE BIRTH OR EVER? Oh, I'm sorry, did I scream? Sorry. Get it together people. Just because they're famous doesn't mean they don't deserve to retain their dignity if they choose. Yes, some celebrity antics throw that out the window, but that should still be their choice and not imposed by a mindless gossip machine parading around as the news. Ok, rant over for now. 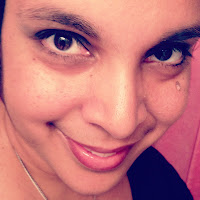 FIVE: Ok, folks - need an opinion on new makeup. You'll notice in my Five Faves that I mentioned exploring bolder colors and pattern. Now I've moved onto makeup. The eyeshadow is a deep blue - yea or nay? It's much more than I normally wear, though I know it's still pretty light around the rest of the face. Heck, I had to retake the photo because a tank top made it look like I was taking some bawdy pics! That would have gotten the blush on my cheeks! 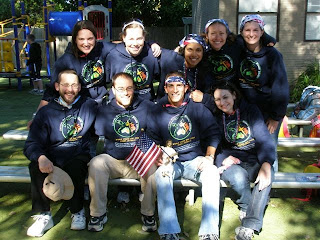 SIX: I have split personality when it comes to World Youth Day. My only experience was leading a group of young adults in Sydney in 2008. Every WYD makes me think of you, my dear and fellow pilgrims. It was a profound experience upon reflection, though the pilgrimage itself was a little stressful as a leader of a group. In retrospect, it was a pilgrimage that solidified vocational discernment for almost everyone who went. Marriages, parenthood, religious life - so much confirmation of where the Holy Spirit was calling us to be and act. Images from those moments our group shared also sometimes pop into my head. One that is indelibly etched in my mind (and an image that our spiritual director so eloquently wrote about but remains in old files I don't have access to anymore) was at almost every large Mass. We were waiting to receive the Body and Blood of Christ, and well, let's say there weren't ushers to corral us all into neat rows and march us through the sections. 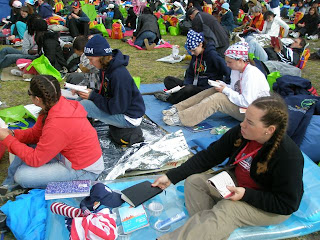 The image I will always remember is of pilgrims pushing to get to the front barrier of the section, hands outstretched, yearning to receive the Eucharist. Like the images of starving children from Ethiopia that flashed across the television screen in my youth, these pilgrims were hungry and desperate to receive their Bread as well. I'm a little amazed no one got trampled, to be honest. It is a powerful memory of just how much we yearn for the fullness that comes from the ultimate sacrifice of Christ. These memories make me yearn to be in Rio just a little bit, but just a little. Veterans of multiple WYDs let me know in no uncertain terms that Sydney was a walk in the park. With the chaos I've seen on coverage of Rio, I'm glad I am participating as a virtual pilgrim (I'm too old these days anyway). I do have a deep desire to see Papa Francesco in person, but I know if it is the will of God, it will happen.
SEVEN: Speaking of images and memories, does anyone else have the experience of listening to a song and being taken back to very specific moments of time with the minutest of details present? There are some songs that transport me back to past moments where I can remember what I wearing, the texture and pattern of my shirt, what I may have been eating or drinking, the scents of people around me. The trouble is that often, those memories can then lead me down the path of critical introspection and I begin to wonder what life would have been like if I had made different decisions or acted differently or...well, you know how that goes. I have to pull myself back into the present and remember that there is not one moment of my life in which God did not cover me in His grace, even if I was not quick to act on it, or didn't recognize it. Hmm, now I'm thinking this could make an interesting plot to a novel or major motion picture! What? You say it's been done? Aw, shooo....
So that's all from my addled brain on this Friday - come back for more coherent thoughts and ranting and raving once my mind takes shape from the mush it is in. Happy Friday everyone! Now go visit Jen and see what everyone else has been up to this week...
at July 26, 2013