Confession time. These takes aren't really dirty. At all. They are going to be quick, though, and actually posted on Friday for a change, which is a little miracle in itself!

--- 1 ---
January and February are not looked favorably upon in the Casa. We commemorate both our fathers' passing within days of each other (though years apart), a couple other deaths in the Hubs' family, and now my aunt's death as well. It is a cold and dreary time for our family. Given all that, we agreed that in years to come we need to plan a way to pay homage to lost family a little better than this year, where we really didn't do much of anything. We're not the best when it comes to surfacing difficult emotions. Shocking, I know. Now we have a year to pray about and create a family tradition, whether it is sharing photos, telling stories, visiting graves or offering Masses and prayers...or some combination thereof. Does your family have special ways of remembering/celebrating loved ones that have passed?
--- 2 ---
How else might January incur my wrath? Add to all that a dead computer with no backed up files now and years of photos that have to be retrieved off memory cards, designs that must be recreated, and documents that are lost to the netherworld of hard drive failures. To rub salt in the wound, the large flash drive I ordered to perform a backup arrived the day old HappyWhitey crashed. And boy did she crash good. Good and dead. Solid mechanical failure they pronounced at the morgue. We're still trying to see if anyone can miraculously bring the information back from the dead. If so, Whitey will be renamed Lazarus. In the meantime, Whitey has been replaced by the Queen of Sheba. (It's a Toshiba...it seemed an appropriate name.)
--- 3 ---

I discovered a new love yesterday. It is a superbly small thing, but it unexpectedly brought a little smile to my face. I have discovered that I love writing with freshly sharpened old fashioned #2 pencils. On the flip side, I still loathe pencil erasers that don't work or are worn down to the metal. I loathe the latter in a way that the mere mention of it makes me shudder. 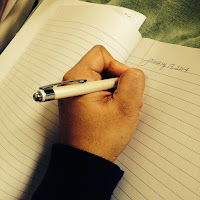 Speaking of writing, does anyone else get hand cramps when they physically write more than a sentence or two anymore? Since the advent of the old computing machine, I don't think my hand muscles know what to do with a pencil or pen for too long! This will be quite a hindrance to my new desire to write more letters and cards to pop in ye olde snail mail. Sorry friends, your notes will apparently not be long ... or they will include a printed version of that which I wished to write by hand, but could not given that my hand is now stuck in a permanent G-chord formation. Great for guitar songs that only use the G-chord. Not great for writing as a lefty.

--- 5 ---
We are now collecting applications for boarding programs that will take an unruly three year old and return her as a civilized four year old? Anyone know of any, any at all? We are at the full on asserting independence at inappropriate times in inappropriate ways stage. That's fancy talk for the kid's throwing some spectacular tantrums when she doesn't get her way, and those tantrums at times threaten to wake the brother. Bedtime is a particular struggle, even with routine. We are trying firmness in responses to final questions and begging. No more books. No more bathroom. No more to drink. No one is sleeping with you. I feel mean, but I would love to arrive at a day when we might have two hours to ourselves in the evening after kids go to bed. Oh, to dream...

--- 6 ---
I've mentioned this before, but it has been cropping up in prayer again and again over the last several days. Being a part-time SAHM and working part-time out of the home, I feel like I am trapped between two worlds. I feel like I can't fully embrace the joys of staying at home, because I am catching up the days I don't go into the office. I feel like I'm not fully able to delve into work, because I need to be sure I am home relatively on time. Trust me, I do know this next part is mostly all in my head, but...I also feel that I have no compadres in the battle. I feel out of place with the SAHMs, but also with those that work full time. I feel like I have nowhere to land.
Li'l G would LOVE for me to find a playgroup to be a part of, but I'm so worn out I hate going out and being "on" when I do have days off. When will the laundry get done or the house get cleaned? Then I get so overwhelmed thinking about it that the laundry stays undone and the house...well, let's not talk about that. It is a work in progress. We won't even begin with all the projects in my head (like an Etsy shop) that are staying in my head for now. I am so happy for my friends that have found mom groups to belong to and projects taking flight, but there is a longing in my heart to be able to find something that fits my situation and schedule too. I know, all in God's time, but if we could get that old Catholic ghetto up and going in the SEMI 'burbs, I'd be all over that now. Thanks!
--- 7 ---

As much as the house is still a work in progress, I did manage to clean out half the basement over the holiday. Whew! Mama is s-o-r-e, tired! What? There is so much garbage that piles up. There is still rubbish we haven't taken to the curb because we don't want our trash collectors to hate us and plot our untimely burial at the dump. Ladies and gents...this is from HALF our basement. Can you imagine? I (we) still have half a basement to go, plus two living levels. It is happening, though. This is the year. This house WILL be cleaned out and space WILL be utilized to its max. It just has to, or I fall back to #6 too dreadfully often. Besides, we get walls of colorful storage bins when I clean out the basement. How lovely is that?? 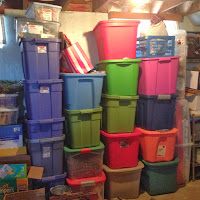 Hmm, so maybe there was a little dirty involved. Just a very little.