7QT: Rays of Hope, Thoughts on Kids, Fun Mom and the Paradox ofMotherhood

--- 1 ---
It started out in the upper 30s (almost 40) and sunny, so who needed a coat? Oh, yeah, we live in Michigan, and by afternoon the wind is chilly and I'm wishing I'd brought one along. #PureMichigan indeed!

The weather does inspire a little hope that we won't be buried under a mountain of snow forever. Spring will be here, even if it seems like it is a lifetime away... 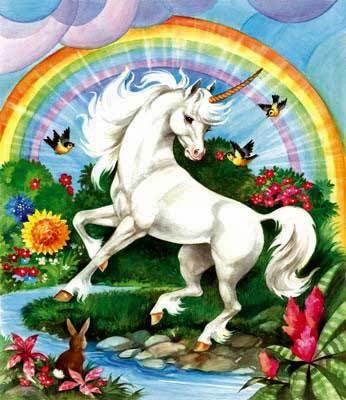 Speaking of Michigan weather, it was ever so helpful in captioning my last post. "Holding off on having kids until you're ready for them is like waiting to leave the house until the sun shines all day on a Michigan winter day..." Basically, it's a giant lie that you will ever be ready to have kids, so waiting until you've lived your life or gotten ready somehow is simply deluding yourself. You may as well believe in unicorns. This post was a follow up to...

--- 3 ---
...what it means to be "open to life." We are, and mostly I think everyone knows what that means. BUT. Based on the response I have gotten to this post, I think we are as a whole not doing a great job of affirming those who have small families. That was my whole point - open to life isn't a family size. Since publishing that post, I have had more than a handful of notes from women who have few children or no children who feel so very judged. We have to be more gentle with each other and begin to assume the best instead of the worst. There's enough pain in this world - we don't need to be the cause for anymore wounded souls.

--- 4 ---
Apparently when the sun comes out for even a moment, fun mom appears. With the temps climbing into the 30s, I finally got up the courage to take the 20 minutes it takes to bundle up this duo and take them outside to play. This was baby boy's first time playing in the snow since I didn't buy his snowboots in August. Why oh why can I not find any boots in season? Ever? We dug up his sister's old boots and ventured outside, much to their satisfaction. And did it ever tire them out.... 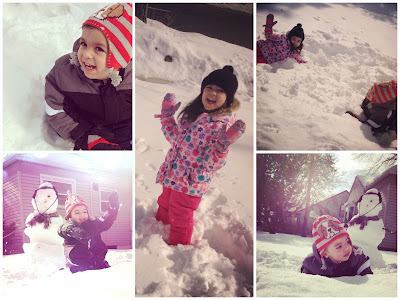 Fun mom came back out the next morning too! Usually as I'm getting ready to go to work, when Li'l G wants to build a fort I'm all rush-rush-rush-we-don't-have-time. This week....eh, why not? It looks a bit more like a cave, but she's got her books and a lamp, so she's happy as a bat. (I don't think clams live in caves.) 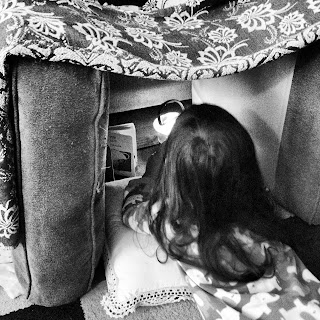 The kids are at their Nonna's. My lovely mother-in-law was going to watch them Friday night, but what with all the ridiculously crazy weather we were having, she offered to take them yesterday morning. Two whole nights of...what is that? Quiet? (Well, minus the feline frenzy.) Everyone offer up many prayers for her in gratitude!!
The sad part? While it meant I could have had hours more sleep than usual (and I did mostly) - I could not fall asleep last night. It just felt strange and wrong not to have the kids in the house. The Hubs? Pretty much snoring on contact with the pillow. As I tweeted in the late of the night, 'tis the paradox of motherhood. You beg for quiet and then are uneasy when it arrives.

--- 7 ---
Finally, a few thousand words about our week...because who doesn't love pictures?