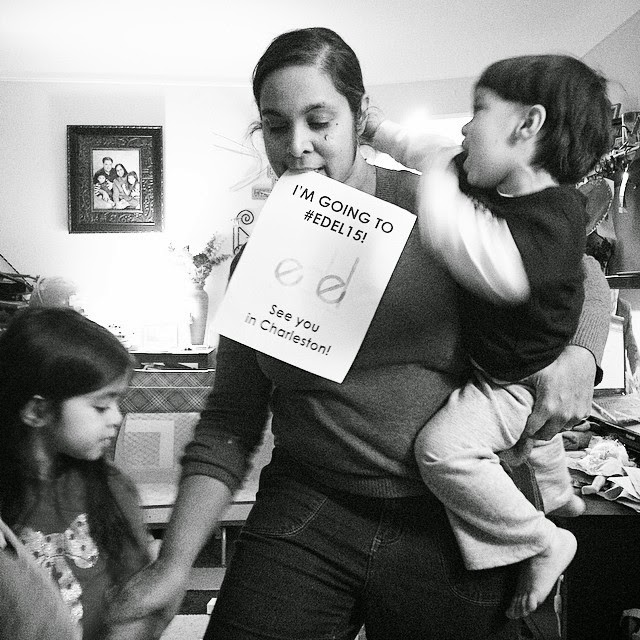 Maybe just a bit more on a quick Edel note. Jen mentioned on her blog that we could send in recordings of ourselves announcing that we were coming to Edel, but to be natural including background noise. Every time I went to record, my little people were so mesmerized by what I was doing that they were silent. (This gives me an idea - I should record things more often.) To get them to "act natural" I told them  mama needed to record something, but they should just play like my normal little monkeys. Enter monkey sounds. So...if you listen to Jen's radio show, you may have heard my little monkeys acting a fool. THAT, my friends, is normal.
--- 2 ---
We've been very slowly getting the house back in order after the great flood of 2014, and part of that reorganization and redecoration has involved our dining room. I don't have a "before" picture because, well, it was just too embarrassing and borderline problematic. Here is our beautiful after, though. 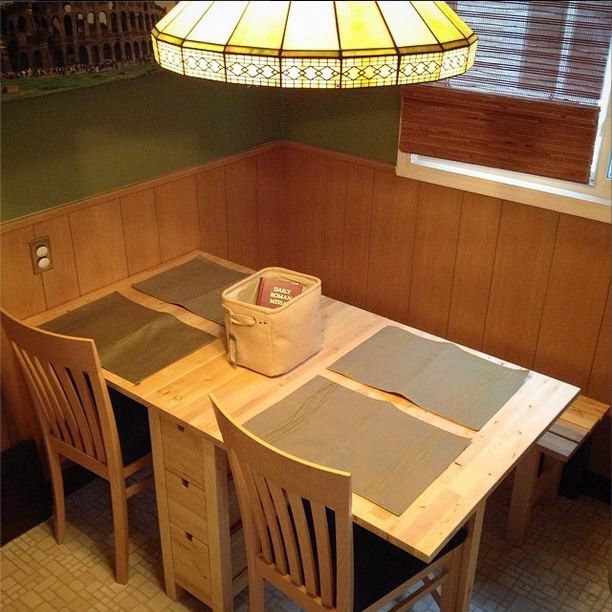 The table has six drawers, three on each side, which now store crayons for each of the kids, coloring books, prayer books as it is our morning prayer spot, napkins, and the fancy placemats when not in use. Aren't we all growned up?

--- 3 ---
There are new pieces up at the shop! Christmas cards (both print and digital format), new 8x10s, and ornaments (coming sometime today). Also in the works - a little something for the kitchen! 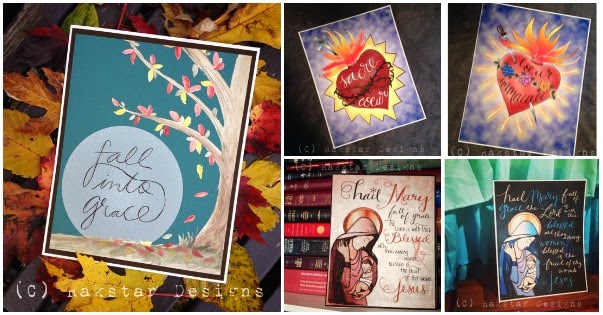 As an added incentive to go take a look, from now until Thanksgiving, everything is 10% off with the code GIVETHANKS14.

--- 4 ---
Speaking of giving thanks, I am so thankful to be working for an organization that truly uses a holy lens to decide its direction, as well as the best fit for their employees. We've recently been going through a little upheaval with our staffing, and with great wisdom, the Board of Directors has restructured some of our positions to best fit the needs of the organization with our gifts/talents. I can't really think of any other organization I have worked for that has taken the time to do this, or views each employee as a gift to the organization worth working with to find a good fit. It is truly a blessing.
With that, my position (as of Monday) will be changing to Director of Volunteer Services (and some other duties as assigned...as with any job). I'll get to focus on building up our volunteer base and creating a training for them, as well as taking the lead on the spiritual development of staff and residents. More importantly, I am able to hand off all supervisory and facility responsibilities to another person. A metric ton of stress just offloaded, and so much excitement about being able to use my gifts and passions to help grow the ministry and its program. So excited. Many things are still nebulous, but overall it is a tremendous gift.
--- 5 ---
My sweet firstborn is so very 4 years old. We just had her checkup today and she is almost 3 1/2 feet tall! It is clear she is lanky since all her pants are loose on the waist and short on the leg, but my goodness. At this rate, she will be taller than both of her grandmas very soon. She passed every test at the doc's with flying colors. As for the shots, while she went in with every intention of being strong and brave and not crying, I don't think her sweet mind wrapped itself around the fact that a mean old nurse would be sticking a sharp needle in her limbs. She was very brave in allowing them to give her some lollipops to make her feel better. 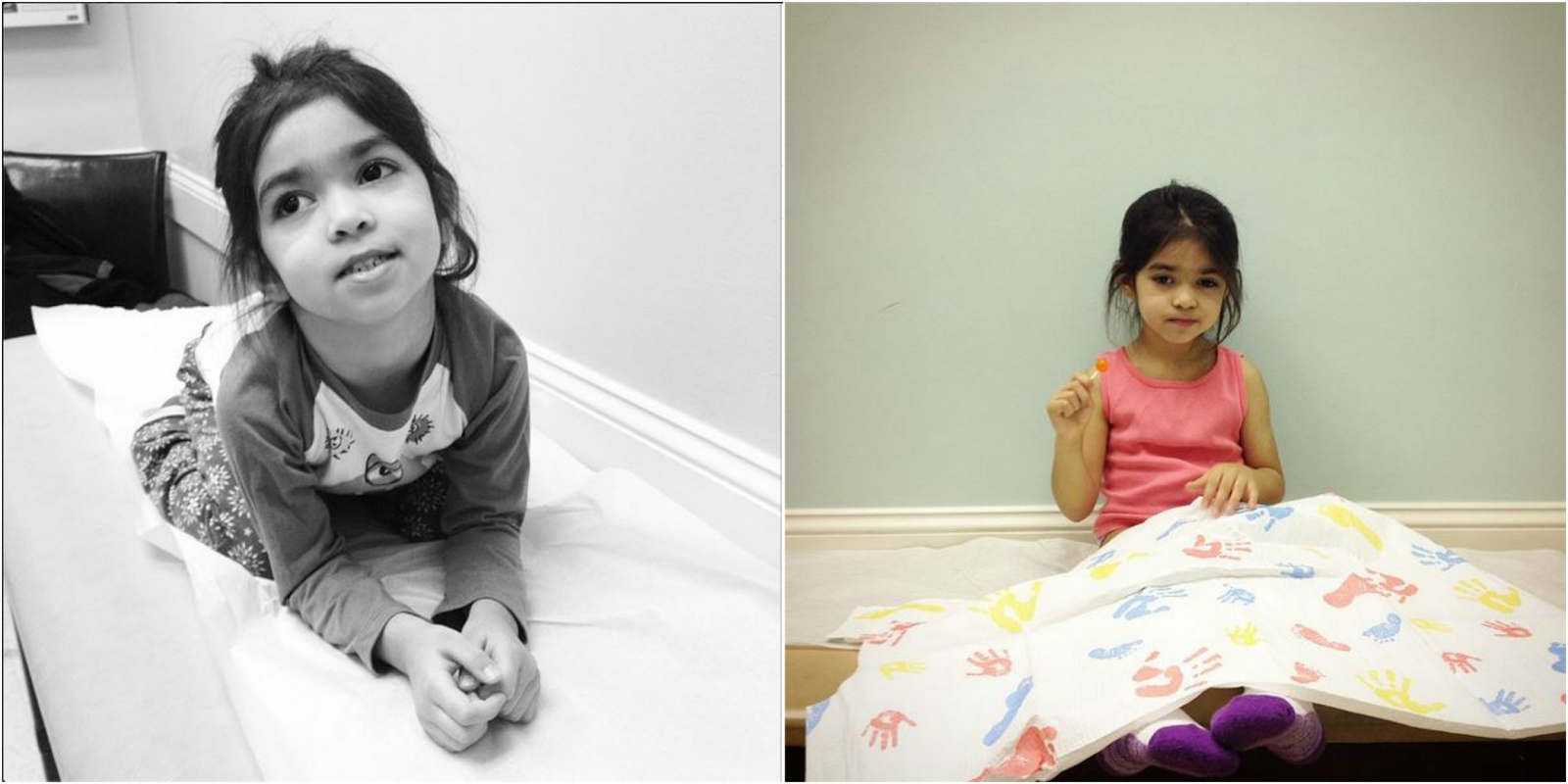 Gia is also beginning to read - she has picked up the habit like a sponge, and tries to sound out every little combination of letters she sees. Even acronyms. She knows how to tell time on a digital clock and is obsessed with it. I am not exaggerating. She is OBSESSED with time and alarms. It's a little unhealthy. No, really. She does love her numbers so who knows - maybe there is a budding coder or accountant in there somewhere. Or a clockmaker. Gia has just been blossoming at school and I just cannot believe that only four years ago she was small enough to carry on my chest. Now she has to wrap her legs around me or they may as well walk her where she is going.
--- 6 ---
Holy global freezing, Batman! Now, I'm not complaining, lest my friends in Buffalo or the western side of the state hurl a few snowballs my way, but BRRR! I know, I know, I've seen the meme - I live in a state shaped like a piece of winter apparel. It's just so ... early ... for this already. This from the girl whose Halloween costumes were fashioned around the ability to wear them over a puffy winter coat and snowpants because she grew in Iowa, and yeah, Halloween = snow. It's a whole new ballgame when you have to get kids up and ready to go to school in this. I was absolutely unprepared, which makes this "J" very uneasy. Very, very uneasy. Thankfully the boots from last year still fit and we have enough warmer clothes out and ready to make it through the two school day week. I sure hope all the snowboots aren't sold out already since apparently they are "back to school" items and not "the snow is coming" items. 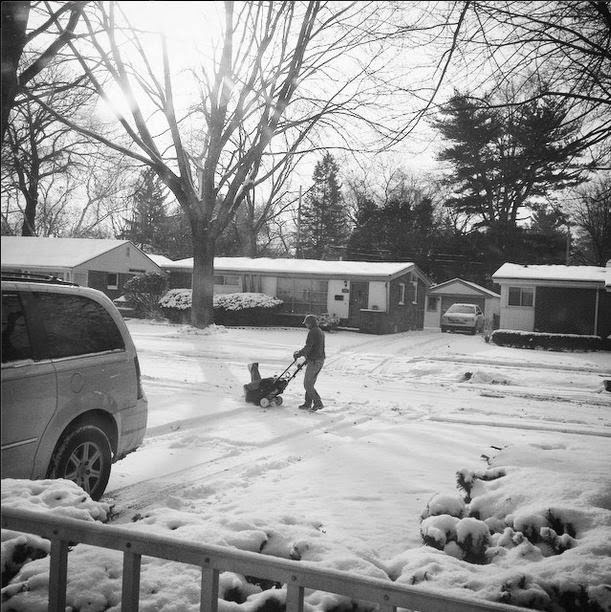 --- 7 ---
I've been working on a few more posts that give readers an idea of my life growing up and how a little Indian girl came to be devoutly Roman Catholic, because...kind of crazy, right? I don't have a St. Paul moment, no flat on the ground epiphanies, so the the story is a bit long and winding in nature. I also cannot restrain my inner Sophia and might have a lot of the "picture it - India 1960" moments...which ironically is where I begin. The first installment is up on the blog, and the next ones are coming. I'm a little stumped by my plan for the second installment, but I'm hoping it will be posted sometime in the coming week. The series is called "From Holy Cow to Holy Spirit." If you want a long story requiring some patience with the writer, check it out!