The Gift of a New Perspective 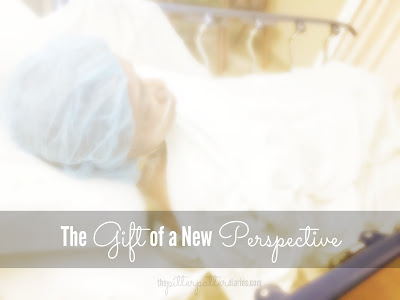 My mom went in for shoulder surgery today. 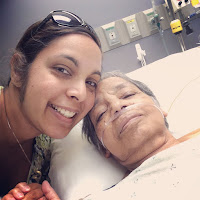 She admitted she was scared, more so than ever before. I remember my own fears about my laparoscopic procedure just a couple months ago, so miraculously, I was able to muster up some empathy for her rather than mock her in true bratty, childish fashion.
She is almost 80 years old. She has seen the good, the bad, and the ugly in her life. She has been filthy rich and dirt poor. She has felt the sting of infertility and the unbridled joy of a miraculous answer to prayer. She was an older first-time mom at the age of 37, and a young widow at the age of 58. She has lived with a house full of extended family, and in a house where she was her only companion.
She has been brave, traveling across the world with her husband + two suitcases and moving to Oregon on her own to escape the Texas heat. Now she is spent. She frightens easily and has slowed down considerably. Her hearing is questionable, and often she lives in the memories of her mind.
And I have been a brat.
You see, the years following my father's death toughened me. I had to move on, and do it quickly. We moved from Iowa to Texas (where I would pursue my graduate degree) so she could escape the constant reminder of him, and because she had family in Houston. I had the cushion of constant activity to keep me focused away from what lurked below: grief.
After graduate school, I moved to Michigan to begin work, and the woman who grew up in Calcutta moved to Oregon to escape the Texas heat. Between the miles, the infrequent visits, the busy life I was diving into head first, I built myself a safe little silo to live in. She was part of it, but I had barricaded my heart.
Because I ran my life at a frantic pace, her slowing down became an annoyance. I kept having to repeat myself. At times, more recently, there are things I have told her that she doesn't remember. While I am running to capture every little second of my day and squeeze the life out of it, because at this pace boy are those little seconds precious, she has the luxury (and the burden) of being a woman of leisure. I am never home. She never leaves the home. 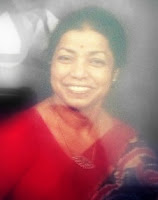 I grieve the superwoman mother I knew as a child. The one with the boisterous laugh and quick temper who would have supper on the table and clothes sewn up at the drop of a hat. The woman who was the neighborhood's mom, because she stayed home and everyone was always welcome for the most part. I grieve the woman who became my friend and confidante in my college years. The one who would stay up late with me and listen to my escapades and soften the blow for my father when there were stories that might make his hair fall out.
In the years following my father's death, her fire has smoldered. There are embers there, but too often they live in the past. My life has become my own, and I have too often lost patience with her, forgetting about all the sacrifices she made for me, and the behavior she has tolerated because I, too, have become a strong, independent woman with a belly of fire (sometimes).
As I brought my mom to the hospital today, I could feel the same impatience and annoyance begin to rise. This time, I rebuked it. I don't want to be that daughter. Sadly, I'm not sure I know how to be different, but I am willing to try and take baby steps. As she walked behind me, because her knees are shot and her gait is slower than I can walk, I again felt the annoyance creeping. "Mom, do you want a wheelchair?" escaped my lips more than once. Each time, she insisted she could walk. Slowly, but she could do it. (That fire is still there, however cooled.)
We got registered for pre-surgery, and when they took her back to prep, I walked to get some coffee. I threw our bags on my shoulder and scurried along the hallway we had just crawled along to get to the waiting area. Then it hit me. How it must drive her mad to have to move so slowly now when she used to run around with me. How being crippled by fear and grief must be devastating when she used to be so daring and full of life. How humiliating it must be for her to have to repeatedly ask for compassion from a daughter who just wants her to snap out of it and go back to who she was.
She is not that woman anymore. Life has changed her. I have to make peace with it, and learn to encourage without expectation. I have to learn to communicate with her in a way that honors her, but acknowledges me as well. We two fiery ladies have to learn to fight with each other again, and not just close ourselves off. Hey - the fight keeps you young, right?
At the end of the day, she needs to hear and feel, just as much as I do, that we are not alone. That she is fearfully and wonderfully made. That her life has worth and meaning even if there are no mouths to feed, kids to raise, or husband to walk with her. That she has life left in her, and I want and need to be part of that.
Yes, all this from walking to get a cup of coffee.
Until next time, let's get out there and love 'em like Jesus . . . especially those at home!