Stop the Insanity! (AKA - How My Head Will Explode During the Election Season)

Fear not! This isn't hearkening back to the infomercials of the 80s. I won't try to sell you a product that will change your life. On the contrary, I am tired of being sold the same bill of goods. STOP IT!
I have refrained in large part from writing about the big black hole that is the 2016 Presidential Election. It seems like there is so much already written, and quite frankly I want this to be a peaceful, happy - albeit sometimes challenging in a good way - space. That golden silence is being broken. The insanity has broken me, and I don't mean the three ring circus that is the campaign of the two major parties. Instead, I am talking about this insane and inaccurate drivel that is becoming more and more prominent the closer we get to election day. This, my friends, is what is driving me past my limit: we do NOT only have two candidates to choose from, and we are NOT bound to vote for one of the major party candidates. Ever. 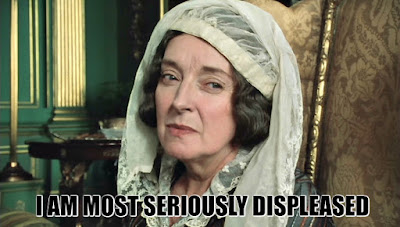 Yes, our system of governance and politics has long favored a two-party system and makes it difficult for other parties to gain a following or a voice. However, the next person who tells me a vote for a third party candidate is a vote for Trump or Clinton (depending on who they don't want to see in office) is in grave danger of ending up witnessing a meltdown of epic proportions. Epic. This will be preferable to the giant goose egg I'd like to see on their heads instead.
You see, this, THIS line of thinking, combined with an ever growing apathy that comes from being comfortable, is what has landed us where we are today. Let me be clear to those of you who might still toy with the idea of approaching me with the "a vote for a 'third' party is a vote for Clinton/Trump" - unless I am casting my ballot for either of those two, I am in no way voting for them. The result of my vote may mean that one of them ends up in office, however that does not somehow change the vote I cast.
Let me beg you to further consider this. If enough of us stopped thinking that way and cast our votes for those we truly want to see in office instead of letting fear decide our vote, maybe we wouldn't be in the cluster of a situation we are in now. If enough of us stopped buying this lie, perhaps we could effectively shift the parties or create new ones as has been the case in centuries past. If enough of us pushed back the loudmouths telling us these are our only choices, maybe the insanity could be pushed to the periphery while civilized discourse regained prominence. All it takes for a revolution to begin is a small group of convicted people to stay true to those convictions and gather steam. To quote Margaret Mead, even though it's highly overused, "Never doubt that a small group of thoughtful, committed citizens can change the world; indeed, it's the only thing that ever has." Well, that and Jesus.
For anyone who is still confused: I will not be voting for Clinton or Trump. I am not yet decided how I shall vote. However, I guarantee you that I will not be led by fear as fear is not of God. There are many novenas and other prayers that are being organized for this election, and I offer you one more act of surrender before Christ. Because there is NOTHING sweet about this election year, I invite you to join me in a sugar fast from now until election day. Nowhere will I miss this more than in my morning dose of that sweet nectar of goodness: coffee. Black coffee will once again be my friend, and I am okay with that.
As a parting gift, I will also leave you with a link to this candidate that I discovered this morning thanks to Jenna. Let no one tell you that we have no other choice that to vote for one of two people who are so contrary to all we believe. Do not buy into the promises of the night that are forgotten in the power of daylight. For my Catholic voting friends - please please understand that neither of these two candidates is pro-life. Not truly. While you may not be convinced, please take a moment to look at Evan McMullin. If nothing else, let yourself be informed of ALL the choices that are present, not just the loudest two. As his campaign says, "it is never too late to do the right thing."
Now, above all else, go out there and love one another. In the name of Jesus, love one another in kindness and humility...and ask yourself if those you are voting for will too...
Blessings,
Rakhi