For just as the body is one and has many members, and all the members of the body, though many, are one body, so it is with Christ. For in the one Spirit we were all baptized into one body—Jews or Greeks, slaves or free—and we were all made to drink of one Spirit.

I've been around the block a few times when it comes to my involvement in the Church. It's been an ebb and flow, from wholly invested to peripherally active. I've participated in a wide range of groups and devotions, movements and actions. Through it all, I have worked to remain at the center of the cross with Christ. In it all, I've noticed some tendencies that pushed me closer to the peripherally active every time. Here are a few that come to mind.

1) Myopic Vision: There is a tendency of some in each segment of the church to see themselves as the most important portion of the body. If others have different passions and interests within the scope of faith in action, it is viewed as not only less-than, but in competition with and detracting from the work of this group. For instance, while many I have worked with in the pro-life movement see beyond abortion, there are just as many for whom it is impossible to see beyond this one issue. Take the current state of affairs. Too many are unable to move beyond the unborn to simply say that separating families as routine procedure is wrong. Note that I've not asked them to say it is more or less important that protecting the unborn. Yet, I am met with the statistics on abortion.

On the flip side, there are those who lay down their lives for refugees and the homeless, but when approached about the unborn seem disinterested at best, or bring up the quality of life for the mother and child. They cannot, or will not, simply acknowledge that the taking of life is wrong.

Myopic vision disables our ability to work together effectively toward a more just society. Period.

2) What-about-ism: This is a product of myopic vision. What-about-ism takes the current issue and brings it back in comparison to the person's pet issue. It stifles conversation, detracts from discussing the situation as it is so we can work together to arrive at a just solution, and negates the other's interest in the current situation.

What-about-ism diminishes the work of others unlike us, and cripples our ability to walk together in mercy for all the suffering.

3) Name Calling / Delusions of Grandeur: This should be an obvious one, and yet how often I hear different factions in the church calling those in other segments names. Heathens, "catholic in name only," weirdos, wack-jobs, deplorables, SJWs, traddies, etc. Our overestimation of our importance in the work of Christ severely reduces our ability to see the good in others who hear a different calling.

Name Calling closes us off to seeing Christ alive in the world through others unlike us, and sucks the life out of us and our work.

4) Distrust: There is, as I have observed, a tendency to believe the worst intentions of the "other." Instead of believing that they, too, are responding to God's call on their hearts, we believe them to be undermining our work, to be creating another faction that diminishes our ability to move ahead in our mission. We believe them to be misinformed, rather than trusting that maybe God is working differently in and through them than He is in us.

Distrust isolates us in our corners and keeps us from understanding the fullness of what Jesus offers and calls us to work toward in His Name.

5) Emotionalism / Exaggeration: There is no question that we have much work to do in the pursuit of a just society. While it may reap momentary benefits to play on people's emotions, relying on clickbait and emotive argumentation eventually drives the wedge between us more deeply. There is enough work for us to do without having to manipulate one another through emotional posturing. It is possible to care both for the homeless AND the migrant, for women's rights AND the unborn, for people of color AND the rule of just law. When you exaggerate or straight up fabricate information to emotionally manipulate another, is the motive to move toward justice or to bring another one to over your team? The work of Christ is not a game of Red Rover.

Emotionalism / Exaggeration makes liars out of us in the long run. It creates skeptics of our work, and ultimately of Jesus if we claim to be working in His Name.

6) Political Idolatry: There. I said it. I'll take my tums and hope for the best. There is a rampant problem with political idolatry. Party platforms have become gospel. They. Are. Not! Take it from a former devoted College Republican. There is no party of Christ. He is found woven throughout the spectrum of political ideology. It's easier to just say "ehhh...this party is pretty close," but that is shirking our responsibility to discerningly and carefully choose elected leaders who will not only do the least harm, but also advocate for the most good.

Political Idolatry makes it nearly impossible to have conversations that span the full spectrum of ideology in order to arrive at the best solution for the common good. 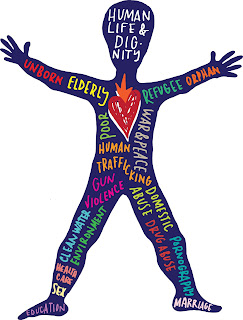 In 1 Corinthians 12:12-20, St. Paul talks about how the body of Christ is like the human body -- no one part is greater than the other, and each part is vital to the full functioning of the body. The way I see it, the work of justice is the same. Each of us is called to act as part of our Christian witness. HOW we are called to act is different according to the gifts and passions the Lord bestows uniquely on us. As my friend's dad used to say, there's a seat for every derriere (though he didn't use the French...). Why try to fit a square peg in a round hole?

If instead we fanned the flames of the Spirit that burns in each of us, how much stronger would our work become? If the head and the heart and the hand and the foot and the lungs and the kidneys all worked together, each in their own way toward their specific mission, just imagine the power the body would have.

What is it you are passionate about? Is it the unborn? the homeless? the refugee? the environment? Can you recognize a different passion in someone else? Stoke BOTH embers and see how the Spirit sets the world on fire through you. There is MUCH work do be done. Let's get moving together.
at July 05, 2018