It's been a nutty week.
-1-
It seems like life is just flying by the seat of our pants these days, which for a planner like me, is wholly unsettling. I get very stressed out with last minute changes to plans or new plans at the last minute. This would seem unlikely for a procrastinator, which admittedly, I am also. Of course, I plan what I will procrastinate. I realized, though, that my unraveling when things happen at the last minute is stressful on the kids and the family unit as a whole, and makes it likely that we miss out on some fun that can arise out of spontaneity. Graciously, God granted me two moments of clarity on this account this week, where I was able to talk myself down, remember who is really in charge, realize that even with short notice things are possible, and put on my big girl pants and just go with the flow. Oh, and it all worked out. Shocking.
-2- 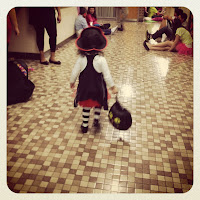 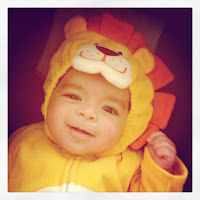 Cue Halloween. We were a little sad that the two opportunities we thought we had to take the Li'l G out for Halloween were a no-go this year. Our town has a weekend Halloween brouhaha downtown with the businesses for the kids, but it was way too cold for our brood. In addition, the Hubbers was working on Halloween night, so I was not venturing out with my 2 within 2 on my own through the neighborhood or making the almost 1 hour trek to his cousins for the family gathering. Enter one of the last minute events this week. The Hubbers texted me after 2 in the afternoon on Tuesday (I know this to be true because the kids were actually napping) to say that the school where he works was having trick or treating from 4 to 6. I assumed he meant on Halloween. He did not. He meant in 2 hours. My first reaction was deeply rooted in my planner "J" (if you've done the Myers-Briggs, you'll know what that means). "What the heck do you mean in 2 hours? We can't do that! Kids are sleeping! Costumes aren't ready! You're not coming home 'til 5!" Enter the voice of God. "Kid will love it. 3 hours to get costumes ready. Ask him to come home just a little earlier. You don't need to go for 2 hours." Yeah, I got that dirty costume into the quick wash and laundered like I've never laundered before. We were done. We were ready. And the Hubbers was home extra early so we weren't even rushing out the door. And Li'l G had fun. Until...
-3- 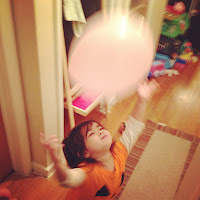 ...this is where Mama Bear emerged. When we were at the school trick or treating, Li'l G found (rather pillaged) a balloon. Several minutes later, it seemed some other kids had too. They were playing "catch" with the balloons. Li'l G wanted to play too, but no one would engage her. Then...another kid took her balloon away to play with it himself. So she was left chasing the kids to try to get any balloon. Mama blood was starting to boil, but being Hubbers' place of employment, I was just trying to keep Li'l G distracted instead of fuming about why another parent or the teachers in the hall would even let that happen. I did finally tell the Hubs, and he is her knight in shining armor. He, with all gentleness and rationality, explained that the balloon this child was playing with had been one Li'l G had been playing with and that after he took it, she was trying to take one from his sisters (true story). In the end, she ended up with one of the sisters' balloons because that little girl took G's away from her, and Li'l G's mama bear grabbed the balloon she dropped and walked out. The reaction in me was absolutely primitive and instinctual - I'd not yet had a moment where that absolute outrage filled me in defense of my daughter. It was just over something silly like a balloon! Watch out world if any actual harm should endanger her!
-4-
Nighttime woes and I are friends again. Li'l G seems to be going through some new phase of separation anxiety at night and naptime. We can't leave her until she is asleep or she screams bloody murder. ForEVER. I know. Sleep training 101. I'm telling you...bloody murder forEVER. Any tips other than the incremental crying appreciated.
-5-
Li'l G also refuses to give up her bottle. Battle ensuing. The girl has a temper, which I dislike, so seriously - battle ensuing. That is all.
-6- 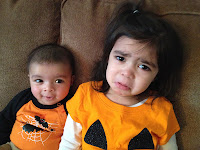 Li'l G amazes me. We had THE WORST DOCTOR'S VISIT EVER! I mean full blown hysteria from her, crying from the baby who was upset that she was upset on top of being hungry, all while we had to wait over an hour for our appointment AGAIN. Yes, they will receive some feedback this time. Totally unhelpful and rather chaotic. WORST. MORNING. EVER. I will say that the doctor was fantastic with her. While the nurse had her worked up into hysteria, the doctor was able to keep her calm and even got her to laugh. She is a miracle worker. Reminder to me to be sure to add that into my comminque with the office.
-7-
Guilt is an awful thing, but it is real. Note: I do not post about guilt to look for kudos or affirmation. I post because I know so many other moms out there feel the same way, and I want to be sure we are not alone. Or as one mom blogger puts it, so we "link arms" and enter the battle together. As a Catholic mom, I feel some guilt that I don't enjoy my children the same way some other moms do. I am not at this point ready to have 10 more...or even 1 more. Well, I'm closer to wanting one more, but that's a story for another day. I feel a little guilty that while others love the homeschooling, the thought of it now makes me twitch a little. I want to send Li'l G to school now some days. I realized last night sitting in a retreat/workshop, that even in motherhood, we are called to different things. We are called love our children in different ways for the glory of God. While some ARE called to have 10 children and homeschool them all, others of us are not. God has planned to use us in different ways. If we spend time trying to be something that we are not, and God has not intended for us to be, we are in fact, doing Him and our children a disservice...and ourselves for that matter. Jesus came so we might have life and have it abundantly. Ours is to discern how he is calling us to live that life in Him, for His purpose and what our mission is. If we are so focused on what we feel we should be doing because others are and somehow we want to measure up to their measure, we lose the ability to hear what God is calling...and equipping...us to do. Someone's life - eternal life - depends on us answering God's unique call to us. We cannot waste time or entertain the evil one by feeling guilty for what we don't feel called to do, so long as we are listening and responding to God's voice. Now, if we have shut that out, then that's a problem, but I suspect that for many of us guilty moms, that is not the case at all.
Now, off to shower quickly and head back to this retreat/workshop! The beauty of children is that I know how to shower, dress and be out the door in 15 minutes or less when I don't have them in tow. ;)
at November 03, 2012