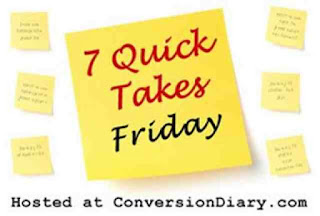 Oh, it's Friday and I'm in love... I'm joining up with Jen & the Gang over at Conversion Diary for another 7 Quick Takes!
Basket of barbecuing goodness: Oh Target Daily Deals, you make spending money so darn easy, but I can't quit you! The latest, greatest find was an early Father's Day treat for the whole family, so maybe more of a prelude to summer treat. For $15, we are now the proud owners of a basket of barbecuing goodness from Famous Dave's. For this price, I figured we would get smaller sample or gift sized treats, but oh no! Target, you done us proud, but if we had known everything would be full size, we may have ordered a few to last us all summer! Finger lickin' good, here we come! 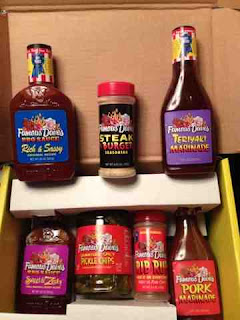 Angelina Jolie: So, did you hear about the time Angelina opted for a double mastectomy so she wouldn't get breast cancer? On the one hand, she is thinking of the devastation the disease can cause (and did cause for her) for a family. On the other hand...really? I guess it is a bit like today's reading (Thursday) with the whole "if your hand causes you to sin..." except that it isn't. I'm not in her shoes. I do not carry this gene as far as I know, and have not lost a parent to cancer - my mother is in remission from lymphoma. I suppose what I am really questioning is the high profile this is getting and the temptation it will cause to normalize that behavior. What she did is not normal, even if it is in some circles laudable. It is not the recommended course of action medically. It is not even possible for people with less means. I have many issues with it from a vantage point of private affairs gone public (why all the secrecy around the act if you were just going to go public with it?) that shape the way women feel they then need to act. Here's a great article that summarizes my thoughts better than I can even formulate them. 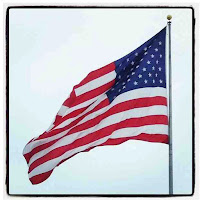 Working Memorial Day has become standard fare for me. It took some adjusting the first year because, like, doesn't everyone have it off? Well, no, actually, they do not. More importantly, the reason I wanted it off was that the Hubs has it off and maybe we could do something or go somewhere. Much like other celebrations, it had nothing to do with the meaning of the holiday. Here is why I no longer object to working on this day. First, my real discomfort is that the Hubbers has to watch the kids while I work since he has the day off. He assures me he doesn't mind, and guess what - he's not watching them, he is loving on them and spending quality time with them as their father. Right...check! Secondly, the whole point of the holiday is to honor those who gave their lives for others in the greatest sacrifice (John 15:15, anyone?) Work for me is not about pushing papers, though there is a fair amount of that in any job. I have the privilege of serving young women who are bringing life into this world while they are struggling with hardships in their own lives that I couldn't imagine. Work for me is to serve as the hands of Christ, to walk with the feet of Christ and to love with the heart of Christ, who gave His life in the ultimate sacrifice. I think work might be the best way, other than Mass, to live in memory of that. 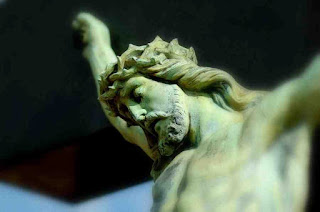 Missing in Action: Over the past couple of weeks I've had a few instances where I have been less present on the interwebs than normal. Some of it was due to technical issues like needing to clear my phone of photos so I can take more and get to Gramming Instantly. Some of it was due to a bout of the blues and feeling less than up to writing. I can sometimes fall prey to the thoughts of insignificance and God has chosen the most obscure ways of showing me that those thoughts are most certainly seeds of the enemy. Two women, one ~4000 miles away and another not 4 miles away, neither of whom I know in person, have shown me that my absence is noticed, which is a direct answer to my emo phase of questioning whether anyone would notice if I were gone. Clearly the answer is yes. God is a sneaky minx! This also just goes to prove what I tried to explain to people so often while working in young adult ministry - virtual relationships are in so many ways just as powerful and real as those relationships in person. The Holy Spirit is not limited by flesh.
Games...I've not really ever been one for playing games on my iDevices, but a couple weeks ago I was a little overwhelmed and thought maybe it would be a nice escape, especially when I'm up whilst the baby is sleeping. I enjoy brain games, and have downloaded a few. It has been fun, but may have been a bad decision. They are both stimulating and mind numbing, and they are dangerously addictive. Instead of praying or reading or writing, I have found myself intently playing games trying desperately to get to the next level while ignoring whatever human or animal tries to get in my face. I'm giving myself one more week to see if I can play in moderation. If not...deleted they are!
Pope Francis Goes Viral: Did you hear that the Pope said everyone on earth was redeemed, even atheists? WE.ARE.ALL.SAVED!!! Ohhhh....that's NOT quite what he said? The HuffPo's bad. Ever since his remarks came out...or an interpretation of his remarks, my Facebook has been going viral with reposts of the Huffington Post article, which is flawed in so many ways. They'd like very badly for us to believe that everyone is saved, and that Pope Francis, the great liberal Jesuit pope, has finally brought new light to salvation. Except that this isn't the case. The Catholic Church has always taught that the whole of humanity is redeemed by the blood of Christ. The door has been opened. They have not, however, taught that everyone will receive this redemption and accept salvation. There is a gift and there is a recipient. To deny the gift is to deny your salvation. Just because Jesus opened the door doesn't mean everyone will walk through it. That said, Pope Francis makes a critical point that we must seek common ground with people to build relationship and open the door for us to share the Gospel, and that door is often acknowledgment of their goodness and good works. Not that their good works have saved them, because only the blood of Jesus did that. Ralph Martin must be shaking his head (his most recent book, Will Many Be Saved, addresses this topic of salvation for all). 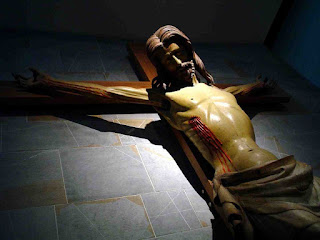 So You Think You Can Dance: I do love this show, but I feel like this year the auditions have shown less dancing and more interest stories and a heck of a lot more of the contortionist dancing versus traditional dance. I'm all for new movements, but back in the olden days, some of this would have been more circus act than dancing. Oh.dear.me.oh.my! I think I just sounded like my mother there. Sigh. Oh well. Be warned, this show always makes me think I can dance again. Sometimes Li'l G approves. Sometimes she doesn't. I'm thankful that I'm the one with the functional camera and sneaky hand. I will be monitoring YouTube closely, dear Hubbers.
For more quick takes, visit Jennifer...and be sure to congratulate her on selecting a publisher for her upcoming book!
If you enjoyed reading this post, follow The Pitter Patter Diaries on Bloglovin!
at May 23, 2013