It seems that those days when I have what I believe to be a healthy amount of uninterrupted free time, that time disappears as I overplan all the fantastically amazing things I will get done. What actually gets done? Clearly not writing. Or cleaning. Maybe a few errands, but since I have all.the.time I take my sweet time and then I have none.of.the.time. Sigh. All that babbling to say, I planned on taking my time with the quick takes yesterday which leads to me writing them right now. Best laid plans... I did hit the jackpot at the Salvation Army 5 for $5 white tag sale though.

Here are the thoughts that fleetly fleeted through my little mind this week:

1) I used to think the road to hell was paved with good intentions as the saying goes. Now I am pretty sure my road to hell is paved with other drivers. The devil was dancing on Friday as I was trying to drive my way all over kingdom come (ironic, no?). A few tips: turn signals - please use them appropriately. Also, when exiting a highway, please do not stop at the end of the ramp. Which brings me to...

2) Rules of the road I think we need to change. Here in the metro Detroit area, we have these annoying stop signs where the service drive meets up with the interstate exits. They have fancy little horse blinder type panels on them to render them invisible to exiting traffic. Major fail. I cannot tell you how many times I've almost gotten in an accident because someone thinks they need to stop as they exit the highway, like the semi Friday who almost turned me into sandwich mush between him and oh, I don't known the four cars exiting behind me. The other one that is annoying is the left turn light. We have this blinking red contraption which was a new fangled discovery upon moving here. The trouble is that they are not uniform across intersections or municipalities. For instance, in some cases, the green arrow comes first, then the blinking red. In others, it is the blinking red and then the green arrow. In other cases there are now four options: the red, the yellow, the blinking yellow arrow, the green arrow. It is pretty much a crap shoot as to which one comes first. Laurel and Hardy could have had a field day. 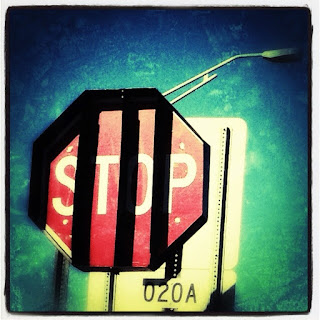 3) While we are on the topic of laws that need changing or risk becoming a public nuisance, how about these fireworks any random schmoe can blow up? Yes, I know it makes us money. I know there are regulations to make them less annoying, like only a couple days around holidays and quiet hours. Clearly everyone abides by these regulations, especially rowdy drunken pyromaniacs who live mere yards away. Color me unconvinced that a little more revenue justifies crazy crackler down the road trying to burn my house down or ... wait for it ... wake sleeping babies!! I thought I'd get you on board there. I hardly consider myself an old curmudgeon, but this has got to go! Not to mention it totally plays into the disintegration of community minded celebration, but more on that in another post.

4) Last night, the Hubbers and I were able to go out on a date night. Long story long, the way the day ended up I had to drop the kids off at his mom's in the morning because they were spending the night so we could go to a mini- retreat this morning, and she usually watches them in the morning so it would have been a lot of driving back and forth if she watched them in the morning and then I dropped them off in the afternoon. Yes, I feel guilty for dropping them off all day. It's been a bit rough at Casa McCormick, but I missed the little boogers!  A lot. Which was unexpected given that it's been rough at the Casa. (How's that for a bunch of sentence fragments, grammar police?) 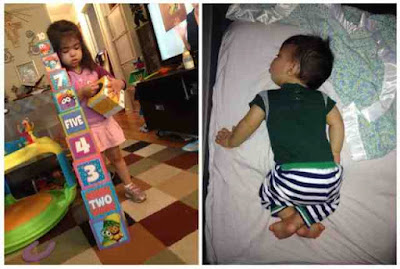 5) I never finished the date night story. As we were driving to dinner before a movie, a plan I had concocted in the afternoon, I joked about what would happen if the restaurant were no longer open. We hadn't been there in quite some time as it was up near where he used to live before we were married.  The Hubbers reminded me some jokes just aren't funny. We pulled into the parking lot, and I apparently am a bit of a prophet. Tokyo Sushi and Korean Grill....now Gramma's Kitchen. Somehow I don't think we'd have gotten what we were looking for there. Sad pandas were we. All this to get to my real point which is this commercial from Famous Footwear. It was part of the pre-preview lineup of commercials in the theater that came on when the Hubs was getting drinks. It may or may not have made me tear up. I'm rambling on ye olde iPad tonight so here's a snapshot with a link to the video. I'll embed it next time I'm on me olde laptop. 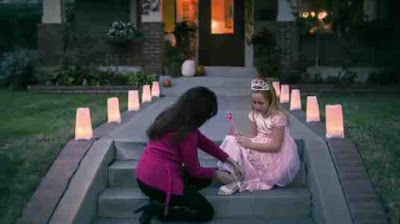 http://youtu.be/cBZvOZw21r
6) We planted our garden over Memorial Day weekend. The Hubbers worked hard clearing all the garbage that had grown and we got some new pots and borrowed a few from his mom to try our hand at container gardening this year since the neighbor's yard looked like this:
I'm excited to see what we get growing! On our list are tomatoes, cucumbers, orange peppers, lettuce, kale, basil, cilantro from seed, asparagus from roots, and garlic from cloves. Super excited to see if our thumbs have greened on up... 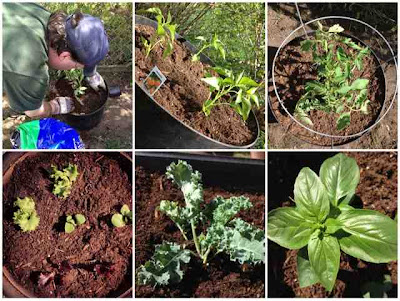 7) As I scrambled to get something remotely edible in the crockpot for the fam before I left for a long at on Thursday, I realized I have strayed far, far away from meal planning. I mean, I plan our meals, but mostly at 3pm with the frantic spinning of the grey matter as to what I can throw together. This also makes grocery trips rather...random. Does that look good? Sure, throw it in! Not the best way to create a budget or keep us from ordering out more than we should. So, back to meal planning...soon!
And that be life in our neck of the woods for now. Check out what others have been pondering in a more timely fashion over at Conversion Diary, and as always, thank you Jen for hosting this shindig!