It's Friday again? It sure doesn't feel like Friday...more like...Tuesday. I know, I know - I'll hush. Tuesday felt a bit like Saturday and Wednesday like Friday, so clearly I'm doing a bit of a Time Warp Dance in me ol' noggin. I warn you, we are currently watching Jonah (Veggie Tales) with the Pirates Who Don't Do Anything, so I may end up sporting me pirate talk at times, mateys.
1) In response to my text introducing myself as a soccer mom in the making, a friend sent me this video in honor of our new status as minivan owners:
Now, we went with a used Chrysler Town & Country, but I'm down with it. The things parenthood does to you... (Jenna and Mike - I think you should make a Catholic spoof with your new Sienna!) 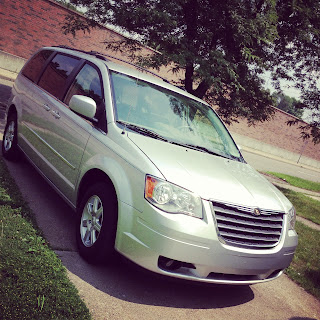 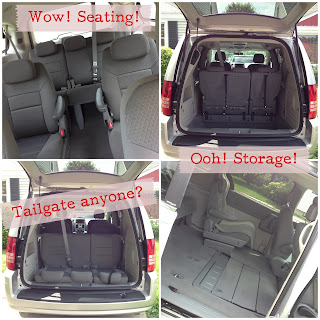 2) Staying with what the what is new around here...home improvements are meandering along. Today's accomplishment? NEW FENCE! Well, new fence parts and gate I should say. We've had a partially fenced in yard, and now it has been completed so our mini-mes don't dash out to the road with vehicles flying by as they escape freeway traffic. As the Hubs observed, it actually makes our backyard look bigger because the property line is defined and there is now more actual space for the kids to play without us saying "don't run to the driveway!" Sweet goodness. 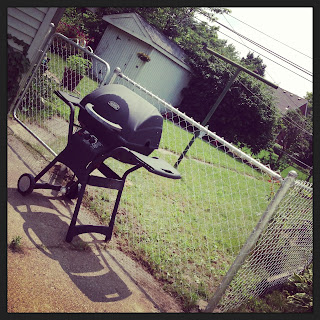 3) In case you didn't see this before, this is what is up with the little dude now:
Yup. Attack of the little zombie...he's a little drunken sailor looking still, being new to the walking thing and all.
4) After my whole reflection on my grinchiness (yes, it's a word now) about fireworks, I thought maybe I was just being a little crabby. The fireworks really did subside right around midnight, and there were no loud explosions all night. There were, of course, people still outside screaming and talking loudly. See? It's really not fireworks I'm opposed to - it is being woken up by people who aren't aware that there are other people around who might be, quite reasonably, sleeping! I'm guessing it was the same people who woke me a few nights ago with loud fireworks. Apparently 3AM is their jam. Mama don't play that jam. 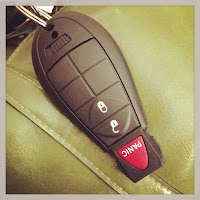 5) Part of our car woes have included needing to get a new key for our existing car. This, of course, involves buying and programming a new electronic key, because for some reason the old cut keys of yesteryear were just too reliable and affordable to replace. Sure, you could argue it's more secure. I say it's a way for manufacturers to make more money. Cynical? Who, me? Well, the service experience was less than satisfactory, too. I called to see if we needed an appointment (no). I stopped in on my way home from work, but they were too busy. When the whole dead car fiasco entered the picture, we stopped at service first thinking "hey, kill two birds with one stone!" but they were too busy. (Note: I don't actually advocating killing birds with stones. end note.) Clearly, the no appointment thing wasn't working so well. Naturally, I went to make an appointment, at which time I was told that because we were in the process of buying said car, they'd wait to enter us in, and no, I really didn't need an appointment. Just come in at 8AM and see the guy that was seated next to him, who would be in at 6.
Today, I went in at 7:45. I stood in line for 20 minutes waiting to see anyone (said guy nowhere in sight). I got a quizzical look about whether the work could be done in the previously estimated hour. I calmly expressed my frustration (seriously, I was calm and polite - honest!), so the guy doing the work put a rush on it. I sat in the waiting room. And sat. And sat. I watched the morning news. I played some 4 Pics 1 Word, which incidentally the lady sitting down the row for me also ended up playing on her iPad. That was amusing. Back to sitting room. Still sitting. Finally after almost an hour and half since I dropped the car off I went back out to see if they had any sort of idea how long it would be. Don't you know the car had been done and no one had gotten me? Thank goodness I only work 5 minutes from the dealership. Not impressed, sir, not impressed.
6) Whilst in the waiting room watching the news, a couple of stories caught my eye/ear. This is the first. It is an organization called Give An Hour, which provides a range of counseling services to active/discharged/retired military personnel and their families (must have served post 9/11/2001). It is a network of professionals who donate an hour to serve these individuals, often dealing with PTSD, depression, or marital difficulties among a wide range of other issues as they readjust to life after war. I've often wondered what it would take to create a network of professionals to do just this for organizations such as the one where I work. I'm so glad to see it is possible and it is thriving for military families already. Kudos to all these professionals who give of their training and time. I urge you to at least check it out, especially if you know military families who are struggling.
7) Last, but not least, the other story that caught my attention was about a young woman, Lauren Shields, who did a little personal experiment called her "year of modesty."
Basically, she decided to forego makeup, high-fashion clothing, and hairstyling (beyond looking presentable and groomed), and chose to wear clothing that covered her shoulders and legs, and were not form fitting for a full year. She blogged about the experience and is now in the midst of writing a book about it. The article she wrote for Salon is fascinating, and this line in particular, which was shared by the news anchor is what caught my ear:

"More than anything else, I learned how to see my appearance for what it is: a “Lauren Suit,” which does nothing more than provide a necessary exterior for an inner life that will never be available in stores."

While we are both flesh and spirit and cannot devalue one for the other, this provides some food for thought as to whether our appearance has become an idol in itself. Definitely worth a read! In contrast, another story on the morning news was about Justin Timberlake's new music video and why it's been banned on YouTube. I'll spare you the search. It's naked women.
There you have it - my seven mostly quick takes. What do you know? The subject matter of my quick takes didn't lend themselves to pirate speak! Count your blessings ye lads and lassies! For more quick takes, visit Jennifer's little corner of the interwebs at Conversion Diary. Thanks for hosting, as always, Jen! Have a splendid weekend! 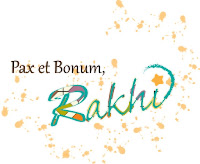 {Post Script Prayer Request: I'd like to ask your prayers for a friend's family. They lost their niece today from a sudden seizure - she is an only child. Eternal rest grant unto her, O Lord, and let perpetual light shine upon her. Bring her family, her mother especially, comfort in her deep sorrow, healing and grace. Let the mantle of your Blessed Mother cover them in this moment of grief, a moment she knows so intimately. May the Father, the Son and the Holy Spirit protect and guide the family always. Amen.}