It's that time of the week where we learn what Casa McCormick has been up to, as well as what has been going through the jungle paradise that is my mind. Aren't you soooo excited (as Li'l G would say)? Keep your hands and feet in the vehicle and by no means feed any of the animals!

--- 1 ---
This has been a bit of a rough week. With the Hubs gone two nights and me still not feeling 100%, oh and what with both kids hitting their toddler pride stride, I'm a bit 'o tired, honey. I mean can't keep my eyes open at 3:30 p.m. kind of tired, which is a peach in the office. At home, I try to lay down, extending that "nap when they nap" mantra from...yeah, like over a year ago...which doesn't work that well when one of them won't nap. At all. In fact, when her eyes start to come close to shutting, she forces them WIDE OPEN and then starts flailing her legs up and down to stay awake. Yes, THAT was my afternoon on Wednesday. I'm just mad I didn't think of starting a Tumblr about why my toddler won't nap (and Rosie already hit the ball out of the park with her post).
--- 2 ---
Not firing on all cylinders and being stretched a little thin, mama's fuse has been a little short. Ok, a lot short. I'm finding muttered vocabulary entering into my everyday parlance that has never been there before. Sure, some of it is pride in thinking, "you know, I really never swear!" HA. Yeah, that evil minx knew he got me. Luckily no little mouths have picked up any choice verbage yet. Yet. Mama is definitely heading for confession before we have a boat full of pirates at the Casa.

--- 3 ---
You know you've hit a low when you try to blame the kids for your own clumsiness. Now I will admit, it was a joint effort, but the little rascal ratted me out yesterday for breaking one of our Mary statues. It was in an attempt to keep her from breaking it whilst reaching for Holy Water, but well, in my attempt to stop her, I ended up knocking it down. Ratted me right out to Nonna that little rascal. To which I say, she broke it. If she hadn't been messing around, no one would have been near that statue! There! Sigh. Gorilla glue, here we come. In other mishaps around the Casa, our crock pot/slow cooker bit the dust last weekend...or rather went up in flames. Awesome. I did find a replacement that came with an additional tiny crock pot to use as a dipper. Melting Pot a la Casa? You betcha! (Did I mention that the Hubs and I finally got to celebrate our anniversary and went to the Melting Pot after prayer group last Friday? It was lovely! They have a Roaring 20s theme for October too...hmmm...) 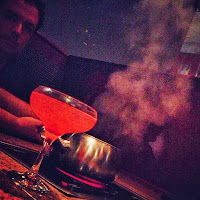 --- 4 ---
I think the little man secretly speaks fluently in about 6 different languages and just doesn't share it with us at home. We were at the library on Wednesday for story time, and he was getting antsy in his stroller. This time, I smartly packed a bottle. When I got it out to give him, he beamed from ear to ear and ever so sweetly exclaimed, "bottle!" WHAT? You can say more than mama and dada? What else you got up your sleeve linguo-houdini? Could I get him to say it again? No. Not once. Just smirks and says "mama" - this one's gonna need a few extra eyes on him.
--- 5 ---
Speaking of library story time... Y'all...I have such a great privilege watching Li'l G grow up right in front of me. It is the greatest/weirdest feeling to watch that little girl actually listen to something another adult tells her and do it, to sit quietly and listen to stories in a classroom setting, to see her interact with other kids. She looks back at me at moments to make sure I'm there and I see her. I flash her a quick "you're doing great" and she beams. It is THE.BEST! I can quietly tell her to sit down, or use a quick sign to say "turn around" and she'll do it. With a rough start that first week, I was kind of dreading continuing, but she has so completely learned and absorbed what is expected of her. It is such a privilege to watch her learn and grow. She mosies her little patooty on over to the craft/activity table on her own after story time (sometimes before it's time) and gets herself started before I can even get over there with her brother in stroller. She is going to LOVE her some school - I wonder if classroom cams are allowed so mama can watch her baby glow as she learns. Nothing at all like it, I tell you. I'm sure I'll be back with something else that is more amazing later, right? All you veteran mamas can laugh now.

Photo of artwork forthcoming. I haven't taken it yet - gasp!
--- 6 ---
I have been invited to give the reflection at a women's Advent tea at a local parish this December. Can I just say that my stomach is in my throat and I might throw up a little because I am both excited and completely nervous? Stick me in front of an audience of a few hundred strangers - I'm good to go. Stick me in front of women who I know and look up to on so many levels...my stomach is a butterfly house. I am so grateful for the opportunity, though! On a slightly related note but not really, I had a meeting this morning with the coordinator, and as I was driving into the parish, I noticed that many of my former colleagues from the Archdiocese were there for a conference. It was so nice to see them again! While I know I'm not called to the same work anymore, there is a great part of me that misses events like that and the collegiality of a large network of ministers. It was great to see them, if only for a short moment. I need to be better about intentionally visiting them with the littles while I have time. I'll have to try to fit that into our limited engagement calendar here soon.

--- 7 ---
Speaking of colleagues and work, while it has taken me some time to adjust to a very different work environment, I am so blessed to have the privilege of working alongside some pretty fantastic women. It makes the day go faster and the sometimes stressful situations more humorous. A couple of them and I have been in a texting frenzy over the last couple days with utter hilarity (well, to us anyway) mixed in with a fair amount of business too. Work goes a lot faster when you can add in some comic relief...a lot of comic relief. With a new baby soon to join us and moms back from delivery and hospital bed rest and all that jazz, the silliness, well, we do love the silliness.