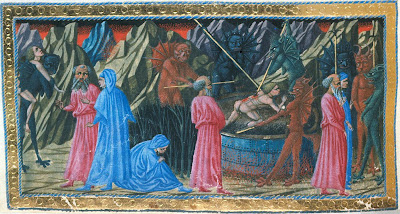 It's Halloween time again. If you get into the whole debate-y thing, you may see some back and forth about whether Christians should be getting in on the action. On the one side is the "taunting demons is great sport" camp, whilst on the other, weighing in is the "it is evil incarnate" side. I'm curious to see who is left standing after ten rounds. Kind of. Ok, maybe not at all.
A la Harry Potter (or rather Hermione, if we are being picky), unholy fear of something, in this case monsters or demons, allows it to hold power. That isn't to say I don't believe they exist and can do great harm. They do and can. I simply believe Jesus is greater and His power has already defeated demons so I'm holding on to Him. On the other hand, I don't like how gruesome costumes have gotten or the rather visible notion that it is the one night young women can be "sexy" (used in lieu of more rather harsh language, but you know what I mean, and the very fact you know what I mean points to its truth).
Here's what I will tell you. I hate haunted houses. I am not one who likes to be intentionally spooked into heart or bladder failure. Maybe it is just me? I've been to several, and I have to tell you - when I think about the things that uplift my soul, a chainsaw motor in my ear (bladeless or not) and hands grabbing my ankles from behind the stairs really don't fit the bill.
However, I do kind of like the concept. Much to the Hubbers' dismay, I am kind of into the whole costume thing. I dig the creative end of it, not the alterego part so much. When I was working in young adult ministry many moons ago (full moons if you wish to keep in the spirit), I had a great desire to create our own "Haunted House - Hallowed Out."

Here's the concept. We are blessed with a cadre of saints and martyrs whose real-life stories would make your heads spin and knees quake. Why go to the trouble of inventing gory? Have St. Lucy holding her eyeballs. Have St. Lawrence or St. Joan of Arc amidst the flames (probably candles for safety of course unless you can be outside with a bonfire). Have St. John the Baptist's head on a platter. You see where I'm going? We have plenty of edifying stories of saints and martyrs who died gruesome deaths for the glory of God. If you're going to gore it up, why not gore it up for the Almighty? 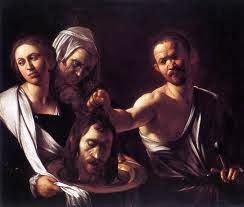 My thought in these here parts was to create a labyrinth of rooms in the basement of a local parish (where their meeting rooms are). There would be themes for the rooms: burned alive, beheaded, stoned, lost their eyes or other body parts, etc. It could be creative, spooky and catechetical all at once. Maybe we could find some saints few people have heard of that have harrowing stories. Create the Hallowed Out route up to a Hallow's Eve party upstairs, even with trick-or-treating for kids if you like.
So, that's my thought. One day I'm hoping to be able to bring it to fruition with some help from kindred creative souls and a willing parish or facility. For now, 'tis just a dream, but hopefully not one that turns into a nightmare!
Happy Hallowe'en-ing everyone!

PS - Speaking of saints, there are only a couple days left to link up your posts on your favorite saints for the book & saint quote giveaway!
If you enjoyed reading this post, follow The Pitter Patter Diaries on Bloglovin!
at October 29, 2013