Christ is risen, alleluia! I've been taking a little break from writing over the last couple of weeks, partly due to some busy-ness and partly because every time I sat down to write, the words just wouldn't come even if the ideas were there. I took that as a sign that I should take a break and follow inspiration where it leads. What have we been up to instead? Lots of visitors, house buying/selling red tape (mom's, not ours), and some new projects (where inspiration has led). I'm working on getting back in the swing of writing more regularly, so I hope to see you around more often!

--- 1 ---
Before we get into Holy Week and beyond, I thought I'd offer a quick wrap-up of our Lent. Every year I think, "This is the year! This is the year that I am going to slow down and reeeeaaaalllly focus. I'm keeping my fast fastidiously (groan if you must), I am simplifying, and I am putting ALL.THE.FOCUS on Jesus all-day-every-day. Spoiler alert - this wasn't that year. The fasting train lost steam about 2/3 of the way through. The books on my list never got read (because who has time or brainpower after all). The focus on Jesus was there, but all-day-every-day? Well.... As Lent drew to a close, I realized that I still have an ideal of what a pious life ought to look like, rather than how a pious life ought to be lived.
Things I did learn to do this Lent:

--- 2 ---
On to Holy Week! My bestie from college, and incidentally the friend who was my RCIA sponsor and the one who invited me to the faith, came to town with their whole brood. We realized we have been friends longer than my husband's students have been alive...and many of the women I work with as well. That's a sobering realization. We also realized that trying to catch up amidst six young children under 7 was nearly impossible. Someone, somewhere, had hands where they shouldn't be at almost all times. Between the trips to the museum, the arcade, Rainforest Cafe, and introducing them to the Coney, Detroit's official food, we were hustling and bustling all over the place!

Sadly, they live about 7 hours away, so times like these have been few and far between. I would love to have them closer to make this a more frequent visit because I'm pretty sure our kids would be besties too. 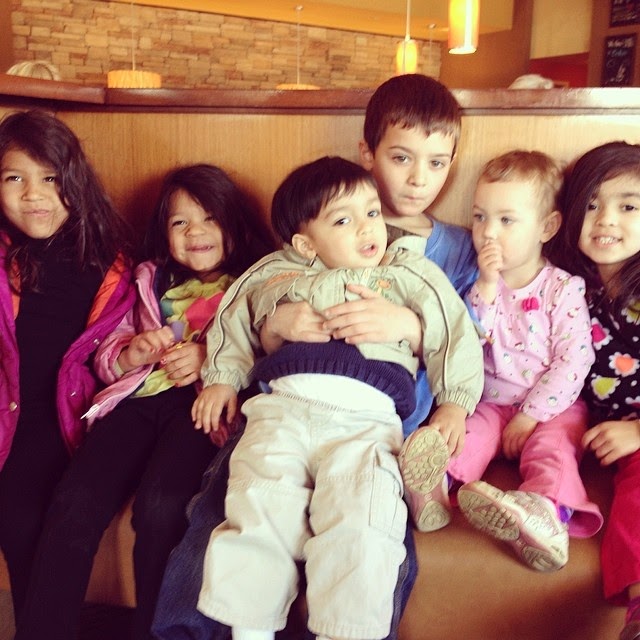 --- 3 ---
Easter weekend, another bestie was in from out of town, so Saturday morning we loaded into the van and headed up to have breakfast with her and our sister from another mister. Yet another opportunity to learn that catching up amidst young children is just not the best idea, especially at a crowded restaurant. It was great to be able to see her, but between "put that down"s and "no you can't have that knife"s, it was perhaps not the relaxing outing I was hoping for. She, too, lives way too far away (you know who you are and you know what I'm saying - too far!). These faces don't just happen often enough.


--- 4 ---
I'm now quite honestly looking back through my Instagram to remember what we did at Easter. Holidays are always a little bit overwhelming for me. Having grown up an only child without extended family nearby, our holidays were usually centered around our little nucleus of a family and whatever else my parents ended up planning. There was no juggling our schedule with anyone else's. Because I have no relatives here yet, we are still on the slower end of the scale, but there is the juggling nap schedules with dinner schedules. As such, I'm usually delegated to desserts for now in case we end up being late to dinner, and needing to look back to remember what we actually did for the weekend. Here's a quick photo dump of our Easter Egg hunt, dessert, and Easter play.

--- 5 ---
I said "yet" above, because as I have mentioned in posts past, my mom is working on moving here. The "working on" is turning quickly into "moving here." We have booked her flight, she has a closing date on her sale, and we are inching toward a closing date for the purchase. Say a prayer or a million for us! The beginning of May is about to get CAH-RAZY up in here! At the end of the day, that means we may have another babysitter ... I mean the kids will get to spend more time with their other grandma and I get to spend time with my mom too. Seriously - I am dreaming of shopping on my own. Maybe just once a month. So nice to dream.......

--- 6 ---
She doesn't know it, but since she is setting up a craft/sewing room for herself in her new home, I've already made plans to "borrow" it as a studio from time to time. As the inspiration has hit since I finally completed that online class I signed up for months ago, I've been busy sketching and lettering. I am still really loving it and finding that as much as writing brings me energy when I am going with the flow, sketching/lettering does so even more. Only when I'm going with inspiration, though, not when I'm trying to force a design. It is as it should be. I really think as I've been praying about ways to incorporate my passions with income, this might be the ticket. I am still taking it to prayer before I jump in with a shop, but so far it's looking likely.

--- 7 ---
On that note, what types of prints would you buy from a hand-lettered shop? Inspirational quotes? Fun sayings? Whimsical? Classic? All of the above? Any sayings you would like to see me work on as a draft? I'm working on a few in honor of the upcoming canonizations of John Paul II and John XXIII, so there may be a giveaway in the near future - stay tuned! 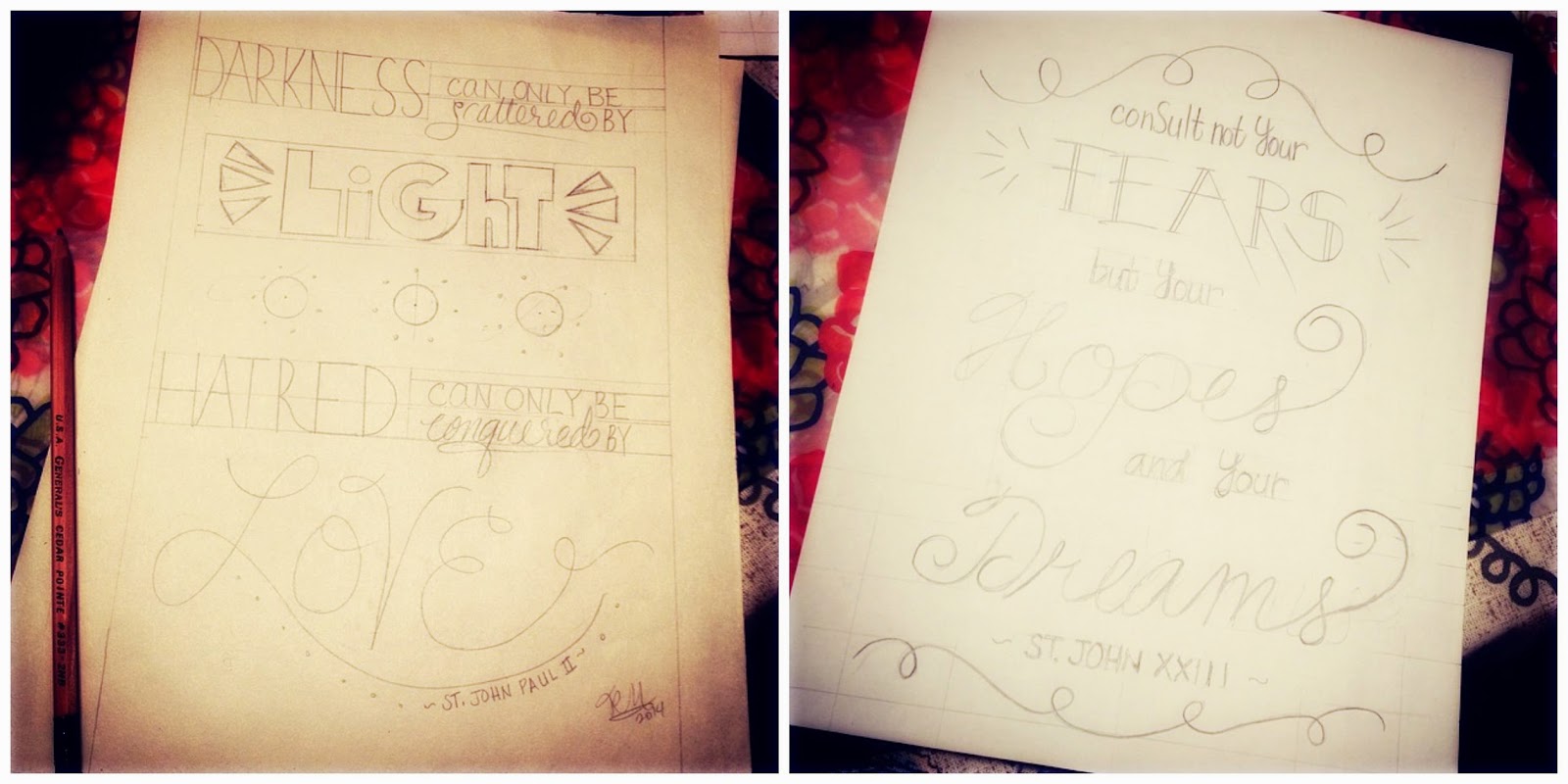 That's the skinny from the Casa. I am hoping to be back in a writing rhythm soon, so you will hopefully see more pitter pattering around these parts in the near future!