SQT: Pssst...Over Here! Summertime, Shops and How We're Not So Sexy

I know. You'd thought perhaps I was on strike. Or been abducted by aliens. Or on some luxurious, exotic getaway. Or maybe taken hostage by the kids...or cats. While all that sounds fascinating, and some more possible than others, I assure you I am still here. I've been in vacation mode and trying to get the house in order over the summer, setting up my studio, and well, exhausted. Read on, friends...

--- 1 ---
To all those ladies at the Edel Gathering this weekend, raise a glass for me! Wishing I could have joined everyone, but we will be on a train. It's kind of the same as fancy shoes and cocktails, right? I can't wait to read all your posts and see all your pictures!

--- 2 ---
The Fourth of July weekend for us was filled with family and gatherings, complete with a family reunion on my husband's side. The kids got to take their first boat ride and walk along the beach on a lake. It was nice to meet some of the people I hear about from his mom and grandma, but it made me realize just how disconnected from my own family I am.

--- 3 ---
I have mentioned before that thanks to Facebook, I have been able to reconnect with many of my cousins. What it also affords me the opportunity to do now that mom lives here is share old family photos, some of which I don't know the history of, but they do because they lived with/near my parents while they were still in India in the 60s. It is so surreal to hear their memories of my parents and grandparents since they know them in a way I never will. I was born fifteen years into my parents' marriage and my maternal grandfather died when I was one. The other grandparents were in India for most of my childhood, so while I visited them, I never really knew them well. My cousins did, especially my elder cousins. It is a treat to read their memories and stories.

--- 4 ---
Also missing on the blog this month, a moment by moment recap of the little dude's 2nd birthday. I did one birthday letter on the blog for my kids, but I really decided that while they are all the rage, if I write a letter, I want it to be to them alone, for them to read when they are older. While I am happy to tell the world what a sweet, loving and joyful boy my Judah is, I think anything beyond that is going to be for his eyes only. Same for Gianna and her determined spirit and loving heart. No play by play on the party either, because let's face it - I just didn't have it that together. So there is no theme beyond a couple of Olaf decorations, no fancy cakes or treats, no carefully crafted party favors. Just a lot of love and Meijer cupcakes. I will note that the cupcakes and I got into an altercation the night before the party as they fell out of the van. I may, or may not have, kicked the boxes and told the Hubs to just throw them all away. Maybe.

I will also say that it was a treat to watch this little guy as people were singing to him. I guess I should have had the video on instead of just a picture, but well, hindsight and all. It was so amazing to see him recognize that people were singing for and to him, and watch him get a little embarrassed and turn away giggling and hide his face behind his hands. So stinking cute! Alas, just a photo of fire approaching a two year old. 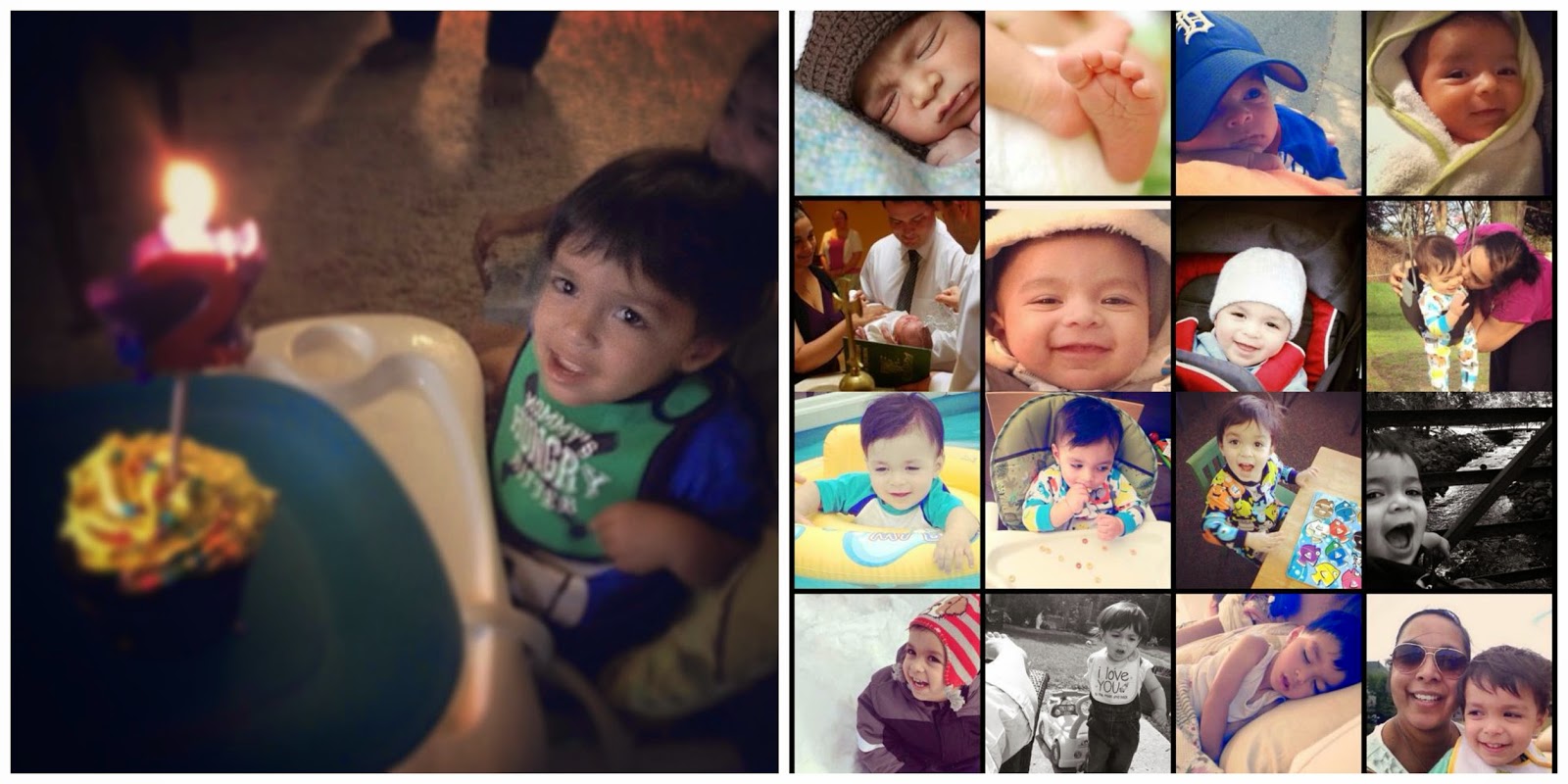 --- 5 ---
We also had planned on a few different roadtrips this summer, of which only a few have materialized. We took a day trip to downtown Detroit and spent a morning along the River Walk. It is amazing how much they have developed the area. It may be one of my favorite places to go now - with or without kids! If you ever make it to the Motor City, you should definitely check it out along with other parts of the city. It's not really as scary as everyone tries to tell you it is. Honest Abe! 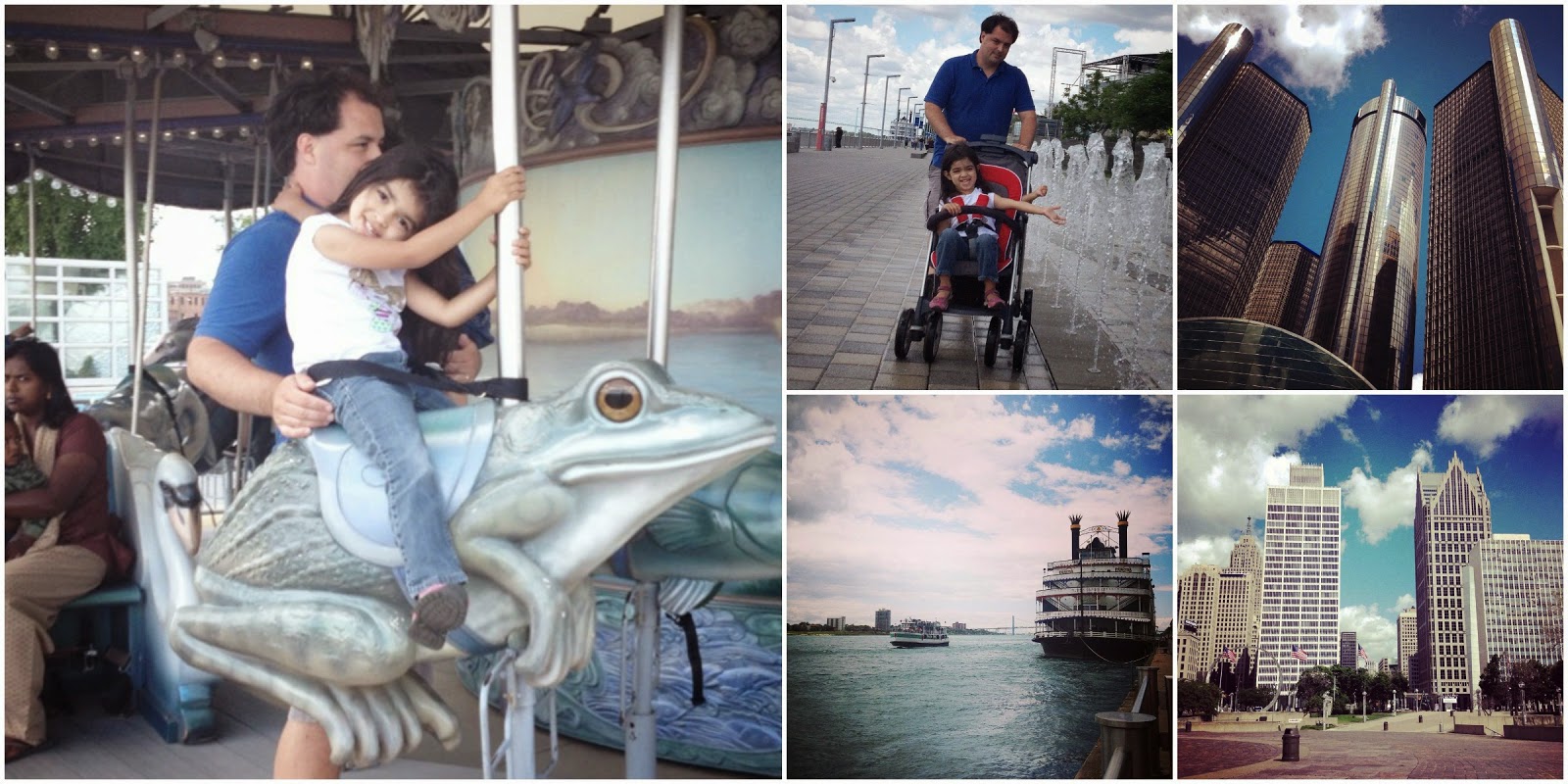 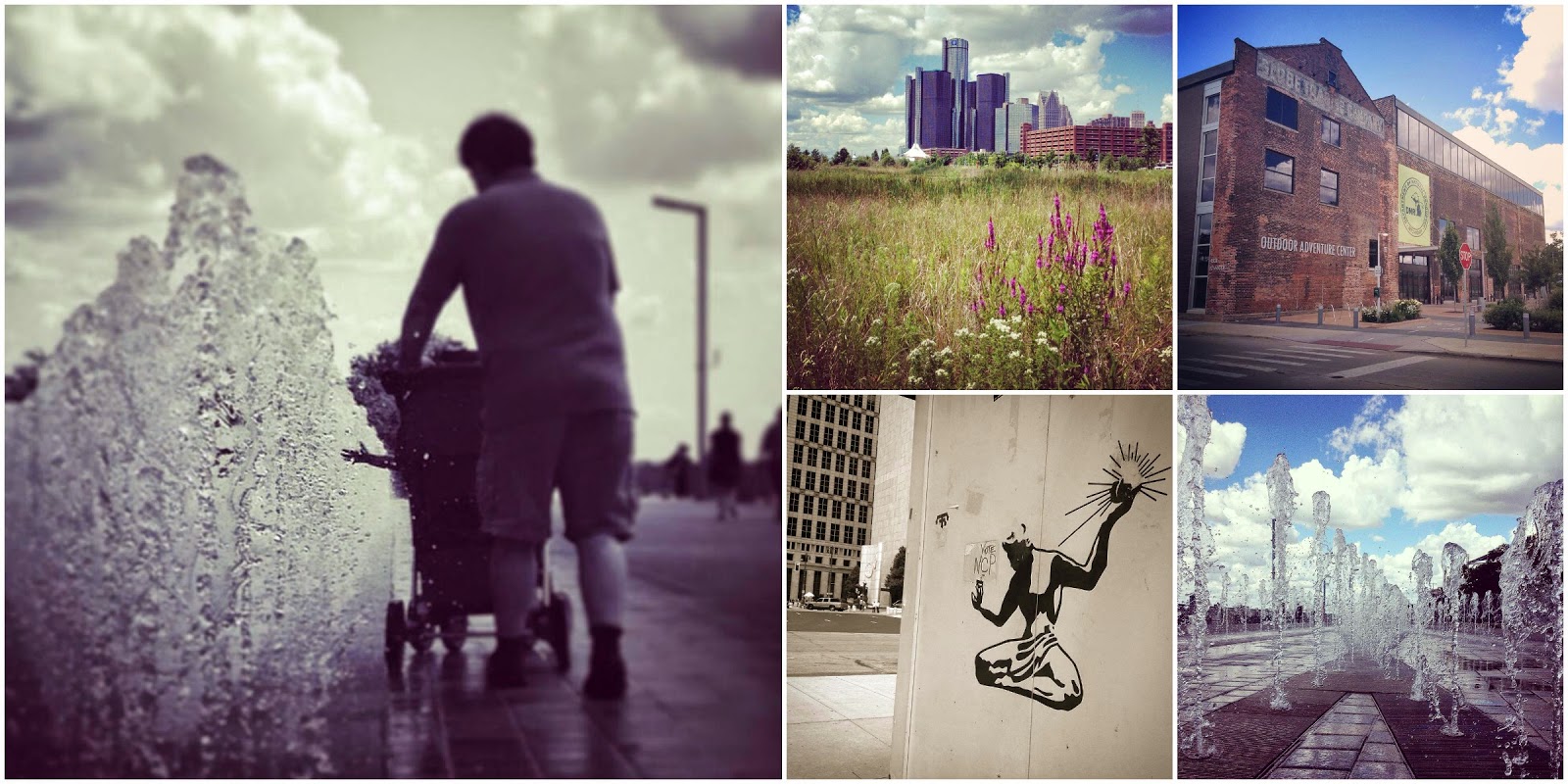 --- 6 ---
I've shown you cute pictures of my new studio space, right? Time in there has been a little slow lately. It turns out going into the basement just doesn't quite rank above the comfortable couch, especially when I am exhausted beyond explanation. No, really. The doctors say everything checks out normally. So, I'm exhausted just because. Fantastic! I digress, sorry. Though studio time has been sporadic, I am excited about some new products I'm going to have in the shop incorporating some of my newer designs. Signs are great...but now...journals...!! You know you need one. I'm also looking at some other items like tote bags, charm bracelets, magnets and mugs. Let me know if any of those sound like items you would purchase with hand lettered designs. 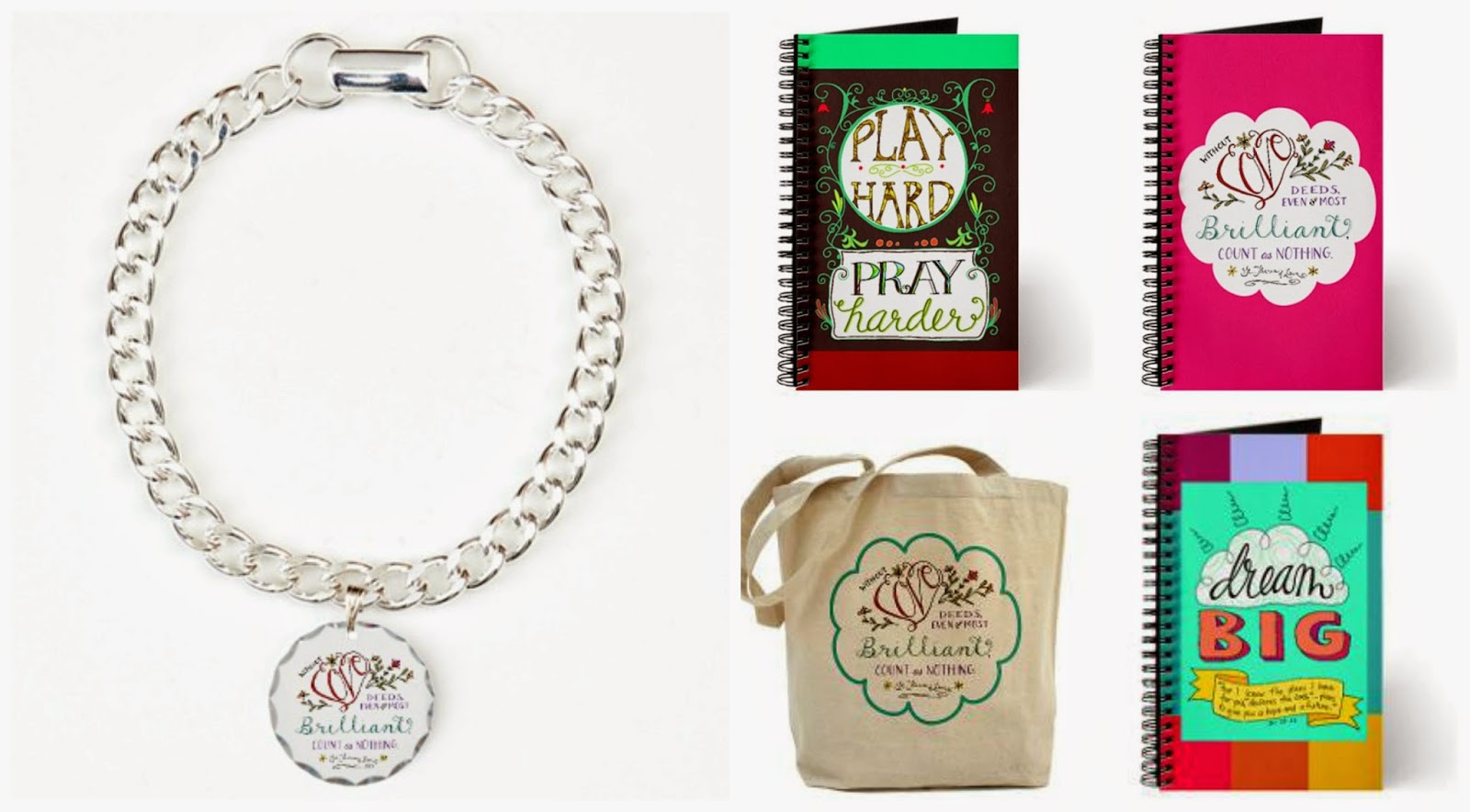 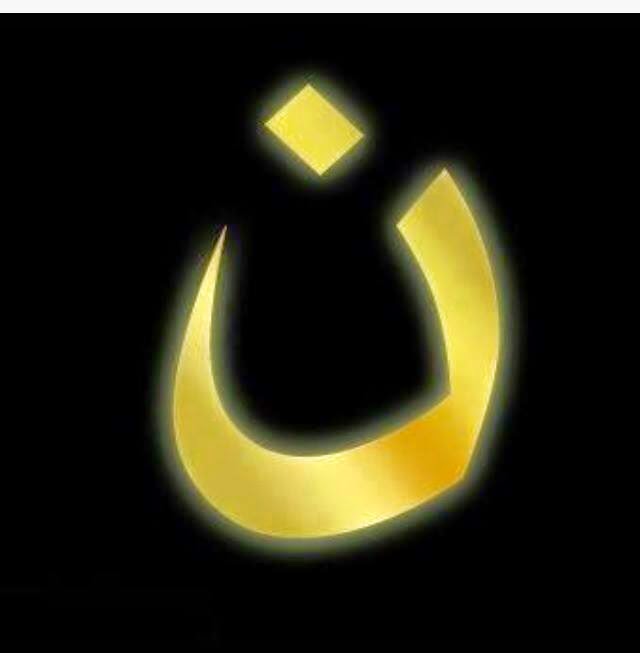 Another reason I've been a little more quiet, other than all the goings on around the Casa, is the chaos that has been unleashed in the world as of late. Does anyone else feel as though Azkaban has been compromised and dementors are wreaking havoc? Just me? Mea culpa if you feel the Potter series to be uncouth for a Catholic home/blog. I can't think of a better description of what the world feels like right now. While it is an excellent reason to eat more chocolate, it is a grim set of happenings. Planes missled down, the untimely death of Bishop Tony Palmer who was instrumental in facilitating a move toward Christian unity, escalating violence between Israel and Palestine with more advanced weaponry, and the massacre of Christians and any Christian sympathizers in Syria and parts of Iraq. With the marking of Christian homes and businesses with a red "Nun," it is as if a reverse Passover is in motion. And yet with every bit of havoc and cruelty, the light of faith shines through in those who remain, and remain steadfast in their love of Christ and neighbor. God continues to answer prayer, with the deliverance of Miriam out of the hands of her captors and into the hands of the Holy Father (how beautiful was that?), with the presence of courageous neighbors willing to sacrifice in the greatest friendship and love for those under persecution.

We will one day regret our deafening silence as a nation. Sure, we have issues of our own, what with the masses of children at our border, but to say nothing? It's not surprising as our foreign policy in recent decades has helped to create the vacuum of power that allowed such barbarism to rise to any power at all. It is not surprising given our current affair with political correctness. To remain silent will be another nail in the coffin of this once great beacon of freedom. Maybe I'm wrong, but I think John Allen is spot on when he says we just aren't sexy enough as Christians to elicit anyone's sympathy. Too old-fashioned for the left, too foreign for the right, is it? Maybe it is time, instead of sealing our own coffins, to begin to put to death the notions of left and right as a political spectrum, and begin to do what is right before no one is left. That means putting jargon and party loyalty aside to reach into our hearts and admit that it is beating and that it tells us that there is such a thing as right and wrong, and devoid of political and selfish afflictions, it can direct us to the light most every time if we let it. Please, oh Lord, let it - let our hearts lead us to what is right and just for all your creation.

{Let's not even start with the possible conspiracy theorists who surmise that there are some powerful people trying to bring about the second coming by their own power and might who might be puppeting some of this hooliganism.}

So many prayers for all those living in fear of death, dying, and killing. Lord have mercy on us and on the whole world!