SQT: Drive-Through Confessions, Demons, and Diving into Summer Vacation Without a Stop at Edel

Why is it that I have the most inspiration to write at times when it is nearly impossible? Like at 3AM when the kid is up and my mind starts racing. Or in the shower. Or really any time except the moments I have to clickity-clack away at the keyboard. Here's this week's edition of quick takes from Casa McCormick!

--- 1 ---
Nothing like a little confession for the soul on a First Friday. We are fortunate to have the Solanus Casey Center near our home where confession is served 6 times a day, 7 days a week. Unfortunately, my last two experiences have been more like a drive-through than a seven course meal of forgiveness and reconciliation. The last time I went, I had to interrupt the priest who had started in on the rite of absolution before I had actually finished my confession because I paused for one second to think. This time I barely got everything out (and didn't get to the whole "any anything else that offends God that I don't yet recognize" part) before the priest began. I'm thinking I might have to suck it up and start going to a parish, if only they had convenient times for the Sacrament. Saturdays a half hour before Mass really doesn't cut it for us regulars, yo.

--- 2 ---
It would also make sense that the minute we leave the confessional, the devil starts in on us, this time in the guise of adorable little children who have lost their bleeping minds. They were SO GOOD in church and while we were praying and in confession. The minute the warm summer breeze hit their little bodies, bam! Toddler antics ahoy! Senses of hearing are lost, vocal abilities leading to whines and screams and choruses of "no!" are not. Ok, so maybe it was mostly the three year old, but somewhere in there the two year old lost his cool as well. A lovely older man offered him a cookie from his shop at the farmer's market, though, and all was well again. God bless him and all those who get it and make life a little easier with upset children.

--- 3 ---
Speaking of the devil, Sherry Weddell shared a post by Fr. Dwight Longenecker about treating demonic infection that I found to be most helpful. First, I LOVE the reference to this as "demonic infection" - it isn't the gore and drama of possession and exorcism, but rather points to a spiritual sickness that can be caused by the pestering of evil, such as a sin we just can't seem to kick to the curb.

That said, I hate that we are so scared to talk about demons, as though mere talk of them will bring about their presence . . . To quote Hermione, "fear of a name only increases fear of the thing itself." Or worse yet, we hesitate to admit a truth that culture seems to ignore - demons DO exist, regardless of how much the modern world would like to believe they do not.We all know in the Christian life there is a battle between good and evil. That means evil exists. We should also know with certainty that Christ has defeated the enemy - the war has been won, though the battles are ongoing in this life. Why enter into battle with blinders on, or with fear, when we have Christ on our side? Here is an excerpt from his post with concrete steps I found to be extremely helpful when you find yourself with a pesky demon on your shoulder or in habitual sin that you just can't shake:

One of the simple ways to deal with the problem is for an intentional use of holy water and the Lords’ Prayer. I instruct individuals to pray the Lord’s Prayer slowly with an emphasis and focus on the phrase “Deliver Us From Evil”. If the issue is an overpowering temptation to continue in sin then also pray the Lord’s Prayer with a focus on “Lead Us Not Into Temptation.”

Wearing or displaying a St Benedict Cross (a crucifix with the St Benedict medal embedded in it) is a sacramental that can have strong effects. Seeing it and remembering and reciting the Latin phrase “vade retro satana” (Get Back Satan) which is engraved on the medal helps to counter the infection.

When they enter church and cross themselves with holy water I encourage them to repeat quietly, “Deliver Us From Evil.” or “Lead Us Not Into Temptation”. It is also helpful to give a name to the difficulty and imagine it as being an infection and the prayers and holy water as being a kind of medicine that fights off the infection. Just as an infection is battled with a course of antibiotics and the doctor tells you to take the whole treatment, so demonic infection will often take a period of time to really take effect. If the sin is deeply rooted because of a long standing habit, then the cure will also take some time to take effect. If the roots are deep in a person’s life they are not pulled out quickly and easily.

--- 4 ---
On a MUCH lighter note, we are cramming the fun into our summer vacation! We got a bit of a late start with the Hubs having some commitments the few weeks after school got out and a family reunion over the July 4th weekend. Nothing wrong with a little late blooming, right? Last weekend, while many of you mamas were whooping it up at Edel (more thoughts on that later), we were on a train. Not to Clarksville, mind you, but  short jaunt on a local railroad. It was the kids' first time on a train outside of the zoo, and while we had window seats, we landed in the outdoor car as our seats were taken. This ended up being far more fun for the kids, and gave me a chance to get some photos for Judah's 2 year old photos, and some unplanned portraits of Gia as well. If you're looking for a fun little outing in Southeast(ish) Michigan, we would definitely recommend the Southern Michigan Railroad! 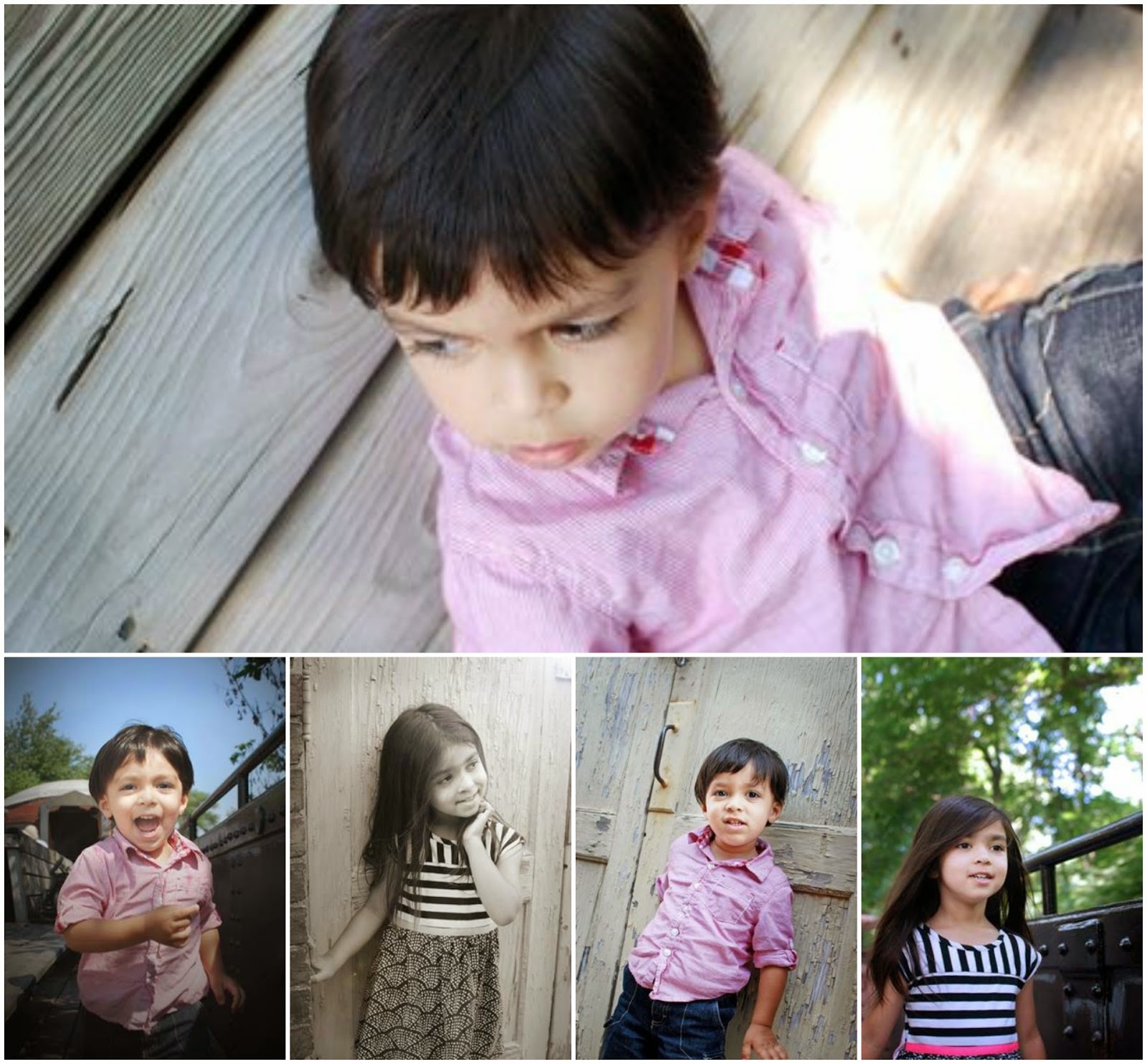 --- 5 ---
After a little locomotion, we headed off to Grand Rapids for a quick overnight vacation. We both know people in and from the area who rave about this little city, and I am happy to say that they are not fibbers! Our first stop was at the Fredrik Meijer Gardens, which were on our way into the city. They have a fantastic Children's Garden, where the kids can enter through a small "mouse door," play with boats on a miniature Great Lakes, dig up some treasures in a great sand pit, enjoy story time, climb a treehouse, and navigate a labyrinth just their size with hidden treasures among wrong turns. We were only there for a couple of hours, but I could definitely see spending an entire day there, and if we were in the Grand Rapids area, many a day.

When we checked into our hotel, we were surprised with a "kids eat free" policy at their restaurant - jackpot! So we lunched up and attempted a horribly failed attempt at naptime at the hotel. Calling it a fail, we headed downtown to walk around and on up to St. Andrew Cathedral, which was beautiful. One thing that really struck me was the interesting juxtaposition of the revitalization that Grand Rapids has experienced - we were clearly walking through an art district with galleries and studios - and a population that is still very much in need, as evidenced by the homeless sleeping on stoops and free clinics and ministries to the homeless that were interspersed along our walk. It was fascinating to experience. I'm sure there will be more that comes from reflecting on that. 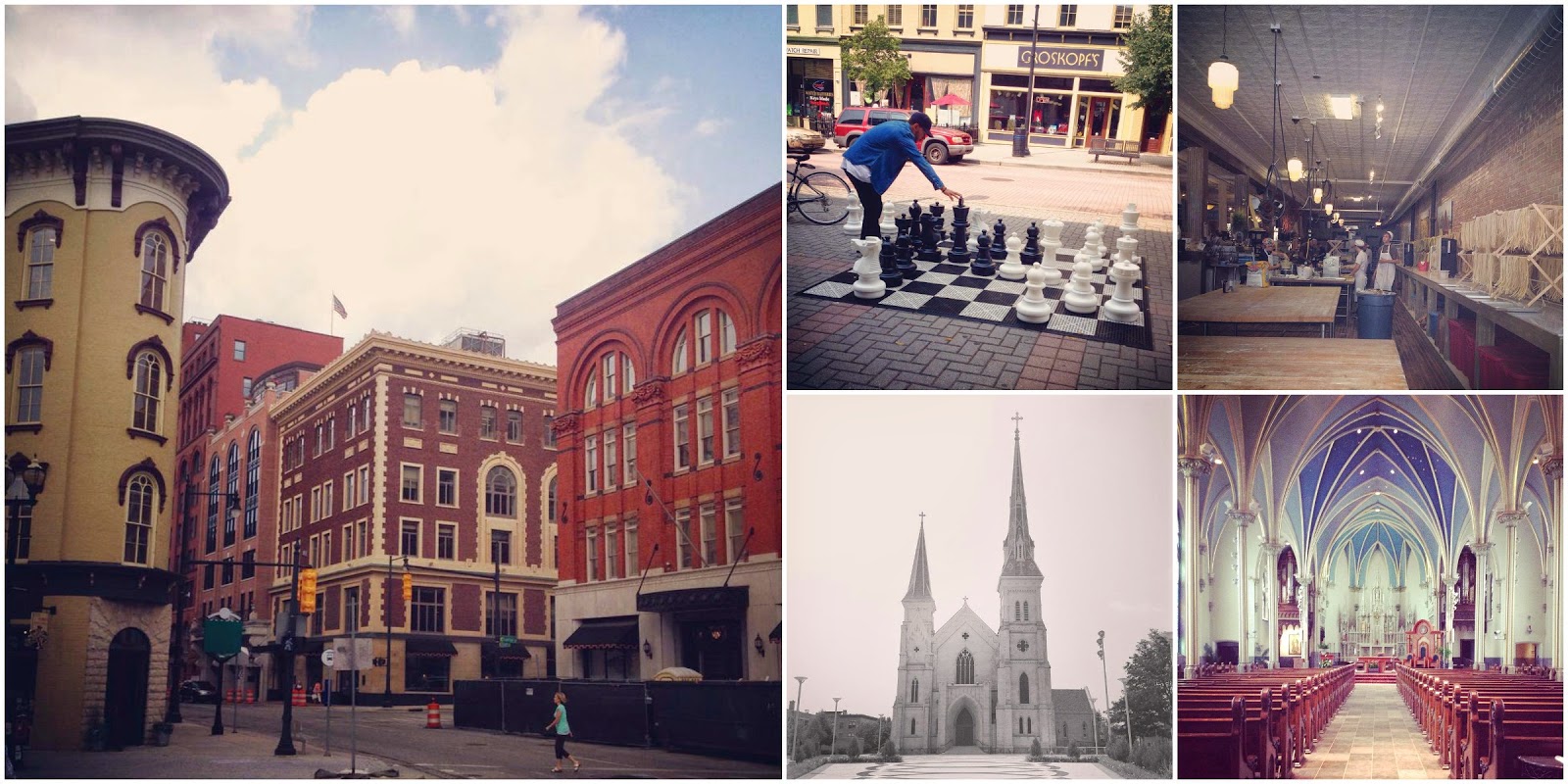 We also happened to roll into town on Meijer Free Tuesdays at the GRAM (Grand Rapids Art Museum), so we were able to meander through there quickly before meeting up with a friend of mine from high school and part of her clan for dinner.

--- 6 ---
Last year was the 20th class reunion of the class I would have graduated with had I not made a beeline on out of high school a year early. We didn't make it due to a late start on our bathroom renovation and I'm not sure what anymore. Mostly the remodel delay, I think, though undoubtedly there was a little social anxiety of returning to high school that factored into that decision.

I am so thankful that I got over my social anxiety enough to see if Jill would be in town and wanted to meet us at some point when we were visiting Grand Rapids. My anxiety, of course, made me feel like we were imposing, but she made it clear that wasn't the case. We enjoyed a great dinner and the kids enjoyed being kids, filled with silliness from all ends, and mooching off plates from our child. Our apologies - we really are not raising wolves. Really. Thanks for making us feel like "old" friends (not indicative of our ages, of course).

--- 7 ---
Speaking of social gatherings, I was not able to attend Edel this year. And by "not able," I mean, I didn't go because I thought it was too expensive. As I've been watching all the photos and posts pop up, there have been many emotions rolling through me. I'm still trying to figure them all out, but to Jennifer and Hallie - I think the reach of what you have created has extended far beyond the walls of the Omni, no doubt by designing something that involved the virtual being brought into the physical realm, only to be sent back out to the virtual. I have more thoughts, and will hopefully be able to articulate them over the next several days. Here's hoping for a second chance to attend in person next year, and thanks to all you who did go for sharing your experiences so openly!