The Great Flood - Part One

In case you hadn't been following on social media, we are in the mix of those who were affected by the torrential downpours in metro-Detroit on Monday afternoon. Our basement had close to two feet of water from a sewage backup, and the roads around us are still closed from damage due to flooding. We live just a few blocks north of the I-75 / 696 interchange in the metro area, and while they have done some amazing work toward getting that cleaned up, it was and still is a bit of a disaster.

In the grand scheme of things, it may not be much that we flooded. Others had far more water and lost far more things. One neighbor said they had at least $50,000 worth of damage to their basement. At the end of the day when the numbers come in, I have no idea what the financial estimates will be. I know the husband lost a whole library section of books that were stored down there, though we instigated a mass exodus of what we could get to as water was filling in on Monday night. 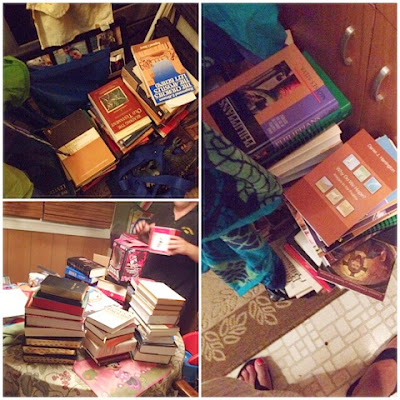 There is some damage to the little studio I had just set up, but thankfully I was lazy in taking down some finished products and new supplies. In the grand scheme of things it is small - but it is OUR small. Our mementos of life that are washed away and damaged, though we decided not to even look through some boxes so we would not actually know what in totality was lost. Now comes the task of trashing. Trashing what could have been given to others, like an old bed and old clothes now laying in ruins and stinking it up. Trashing old memories that, for the sake of our mental well-being, are better left un-recovered.

While we are upset with the loss of many of our things, and let's face it, for the Hubs his books are like his babies, we also know they can mostly be replaced, apart from some of the mementos. What was the worst feeling was watching it all happen and realizing we could do nothing to stop or impede the coming of the water, the ruining of the things. It was such a mix of emotions. I kept going back and forth to realizing that they are only things, to crying because we had worked so hard to clean so much of it up and begin to use the space we are blessed with having. And now - what a mess! I wavered between realizing that we didn't have the worst of it and wanting to scream when that wave of adrenaline-fueled stress would rush through. Yes, I had made it home safely and seemingly just in time before the waters rushed over the expressway. So many were stranded or on the road for multiple hours. And yet there was sewage bubbling into our basement with no relief in sight. If only the water would stop and give that poor sump pump a break.

Monday night, by the time our heads hit the pillows, we were in a mixed state of exhaustion and utter alertness, lest more water start gushing in and requiring a more concerted rescue effort of things. Our home looked looks like a flea market, with piles of goodies strewn about. No fleas yet. Also no market - don't come with your quarters.

I sat in bed as my mind raced between comparing notes with everyone else via social media and thinking about all those who had experienced loss from natural disasters. If this little bit of flooding created such a battle in our own souls, how must those who experienced losing everything, even loved ones, in flooding or tornadoes - how must they have felt! How much loss and heartbreak and struggle. The magnitude here is not catastrophic, but loss is loss. Pruning is painful. We realized our attachments, though not un-noble in nature. The books the Hubs lost are all theology and Scripture related.

Yet...they are things. We had a lot of things we lost. It is not a small thing to realize that part of that is maybe because we have too many things. Things others could use. (No, Hubs, I'm not speaking of your books. You may keep breathing.) If this is the worst loss we go through in our lives, then we can truly consider ourselves lucky.

Now we begin the task of cleaning up and trimming down. There are still lessons to be learned and frustrations to be managed. In the end, this whole ordeal definitely stinks - quite literally - but we have a lot to be thankful for most certainly. More on that in the second installment.


For now, it's time to get back to business.