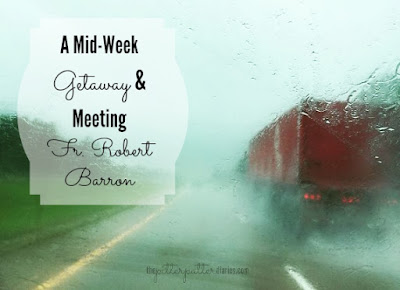 This is my life this summer . . . or at least the last week. The wheels had barely touched down after jetting back from my weekend getaway to Charleston, and the wheels of our swaggerwagon hit the road for a couple days away. The unpack to repack was a dumping of the suitcase into the laundry and filling it back up with whatever clean I could find. Laundry be damned! 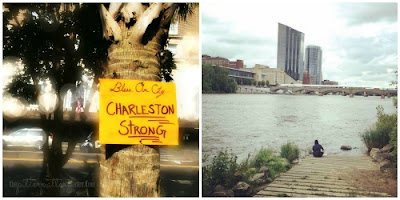 The husband and I had a quick getaway to Grand Rapids without the kids. Father Robert Barron, best knows for his Catholicism series and Word on Fire ministry was speaking at Baker Bookhouse there. Through his own Catholic Bibles Blog, the husband has made a variety of contacts and friends throughout the world. One particular gentleman, Louis, and the Hubs struck up a friendship when Louis was coming into the Church. Coming from a Baptist background, there were more than a few areas of Catholic teaching and theology that he wanted a better understanding of, and the husband was able to walk with him through that journey. It really is a beautiful thing, and Louis has been a generous friend. 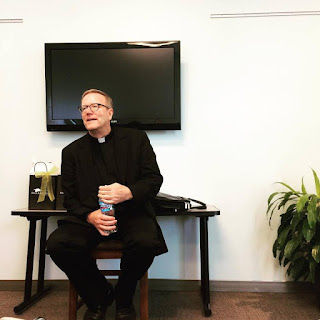 It was Louis who organized this event with Fr. Barron and invited us to attend as his guests. There was a short question and answer (akin to an artist meet & greet) before the larger event which we were able to attend for a nominal cost. Fr. Barron impressed me by his easy manner, and proved himself to be a intellectual man to the core. He reiterated over and over how important it was to be able to speak of the faith with intelligence, how much religious education let us down when people assumed things were just too hard to digest and understand for the average person. All that with humor and ease.
Father Barron talked perceptively of a loss in this day and age of the moral argument. He explained how there has been a shift from operating under a philosophy of end, where this life is not all there is and understanding we will not be here forever, to a philosophy of rights, where we are entitled to everything because it is our right. We have lost a deep understanding of our interconnection. We have replaced our ability to debate intellectually and have replaced it with an inclination toward emotive expression. We feel the feels but don't always think the thinks.
There were many other questions and answers given, but admittedly some were over my head since I haven't taken a theology class in several years. I realized, though, how much I miss the intellectual stimulation and theological conversation, though I desperately also need to be able to see its fruition in applied action. I'm not sure what God is doing with that desire, but I place it before Him to see where it leads.
This is not where the conversation ended, however. So generous is Louis, that he invited us along to a small dinner with Father Barron. We all piled in his car and headed over to Noto's for some Italian fare. On the ride over, I was able to ask a burning question of Father Barron that I didn't want to take up time to ask during the Q & A: Cubs or White Sox? (He's a Cubs man.) This actually led to a conversation about the Tigers (that I listened in on because . . . sports), which revealed that Father Barron had lived in the metro Detroit area for a portion of his childhood.
I had mentioned to a friend that I was envisioning the wreckage of the future as this time approached. In my head I saw a tongue-tied, flustered me spitting food out at the magnanimous Father Barron. I am happy to report that did not happen. In fact, because the conversation took a more personal turn and provided a little more connection to him as a person and not as a famous priest, I was far more at ease.
Dinner came and went, and with it discussion of hot topics like gay marriage and less hot topics like the revitalization of Detroit. One moment I appreciated most during dinner went unnoticed by everyone else, I think. I happened to make a quip, as they presented us with dessert options that we were too full to order, that I'd just Instagram it and call it good. I'm pretty sure I heard a stifled laugh come from his direction. He may be the only one who got it.
Micaela commented on Facebook that I mentioned talking with Fr. Barron as if it is was no big deal. I had to think of it as such or you know - wreckage of the future. On the ride back to the event, I might have demonstrated just how much I wasn't thinking about the fact that Fr. Barron is kind of a big deal. As a final question, I asked him which of the places he has visited during his filming and travels he enjoyed most. One of his answers was India, and he happened to make a comment about not loving Calcutta. On instinct, as though we had been friends for decades, I blurted out, "Hey! Those are my people you're talking about! Watch it!" and then promptly froze in embarrassment. Praise God he has a sense of humor and also doesn't take himself too seriously. It led to a laugh and a discussion about India, my family, and the jolting reality of Calcutta's poverty (ohhhh, the smells!).
So you see, Micaela - there was no way a tongue-tied introvert like me could have realized what a big deal it might be to be able to have that opportunity to talk with Father Barron (whose talk was wonderful as well). I would have sat there nauseous with my heart pounding out of my chest. Instead, we got to talk about baseball, about the shards of Christianity and redemption that exist all throughout our culture and the world, the need to reclaim our intellectual tradition, and a love for my people that no stink can overcome.
Thank you to Louis for your generous invitation. You are so good to us, and we cannot thank you enough! Thank you, Father Barron, for putting us at ease. May God bless the important work you are doing.
Until next time, remember - everyone is a big deal to God! Let's get out there and love 'em like Jesus!