Talking about Pink On This Feast of Michaelmas (Michael-what?)

"I began to be afraid you would never come back again. People did say you meant to quit the place entirely at Michaelmas; but, however, I hope it is not true. A great many changes have happened in the neighbourhood, since you went away. Miss Lucas is married and settled. And one of my own daughters. I suppose you have heard of it; indeed, you must have seen it in the papers. It was in The Times and The Courier, I know; though it was not put in as it ought to be. It was only said, 'Lately, George Wickham, Esq. to Miss Lydia Bennet,' without there being a syllable said of her father, or the place where she lived, or anything. It was my brother Gardiner's drawing up too, and I wonder how he came to make such an awkward business of it. Did you see it?"

Bingley replied that he did, and made his congratulations. Elizabeth dared not lift up her eyes. How Mr. Darcy looked, therefore, she could not tell.

How could I pass up starting a post with an excerpt from Pride & Prejudice? While so many of my friends are floored that this is not my number one favorite book of all time, it is definitely a staple of my reading (and re-reading) library! Additionally, it is perhaps the first time I was ever introduced to the feast of Michaelmas.
Michael-what, you ask? Quite literally, the Mass of St. Michael. Or in the current calendar of the Church (liturgical calendar) the feast of the Archangels (Michael, Raphael, & Gabriel). We call on St. Michael in particular for protection against evil.
For more on what Michaelmas is, and how you can celebrate it in your home, visit Haley over at Carrots For Michaelmas (I mean it's right in her blog title, right?).
What I find particularly interesting about this year's Michaelmas is that it falls squarely after the visit of Pope Francis in the United States, and on a day that Planned Parenthood has chosen to declare a "pink out day" in support of its organization. I don't normally write about the more controversial topics here, but I can't help but notice a rather ironic choice of dates. On the feast of St. Michael, who defends us against the devil, Planned Parenthood has chosen to hail their battle cry.
If you have been under a rock or uninterested over the last several months, Planned Parenthood has been embroiled in controversy after a series of videos exposed some rather stomach turning practices by the clinics. Even if you believe that Planned Parenthood provides essential services, these video are hard to ignore. Yet, for many, that is exactly what they have been doing. Justifying. Calling into question the method of obtaining the video (which I'm not a fan of, admittedly). Dodging the real, essential issue. Are these babies actually babies? Should ANYONE be treated so callously or seen as a profit margin? What if they were puppies - would we be more outraged? Why not root out the evil so the good work can remain untainted?
I have to admit I did not fully watch the video. I cannot. My stomach and soul cannot handle it. I am not burying my head in the sand, however. They do exist, and the practices they expose if even half is true . . . the practices are evil. We must start to call a spade a spade, or what kind of world are we leaving for our children?
On this Feast of Michaelmas, while much of the world will "pink out," I am thinking back to the words and actions of Pope Francis. While it is tempting to go into combat with Planned Parenthood, I wonder if instead our response shouldn't be to love more - to love better. In the end, this isn't just about abortion. It is about the value of life itself. No one is a commodity. No one is disposable, part or whole. No one.
So this Michaelmas, I invite St. Michael to do the dirty work, and I'm going to stick with the love. I say we stand for the dignity of ALL life - from conception until natural death - by our words, but more importantly, by our actions. Take a meal to the hungry. Help a young, pregnant woman find strength. Stop talking about others as though THEY are our enemy, regardless of their actions.
Here is an image if you want to "Pink Up" in love. Let's show the world what we are FOR, instead of always barking about what we stand against. Love one another . . . all anothers. If this post angers you, are you open to a discussion? Please, don't just walk away - let's chat. Let us look at each other in love and get to the heart of our disagreement. Maybe we won't change each other's minds, but at least we can say we listened to each other, right? 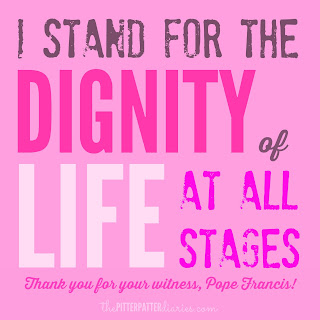