No Beauty Sleep for Me!

Though the little boy slept a full 8 hours...that's right - EIGHT HOURS - there was no beauty sleep for this mama. Someone is conspiring against me! At this rate, the luggage under my eyes may be there as long as the lost luggage on Saturn!
Whilst the babes all slept peacefully, praise God, we were up due to a carbon monoxide detector that wanted us to test it so it could tell us that we were at 0ppm CO. Did I mention that it was at 1:30 in the morning. By the time we figured all that out, we went back to bed around 2AM. I then felt it necessary, just in case the detector was faulty, to spend the next hour monitoring my symptoms and researching carbon monoxide poisoning and the features of our detector online. Once I heard that alarm, all I could think of were the news articles about the families who didn't know and then ended up dead. Yeah, I'm that girl - I worry even though the detector really detected  nothing.
I am thankful, though, that it was nothing at the end of the day (or rather the beginning of it). Plus, the whole ordeal made me think of Phoebe's altercation with her smoke detector which made me giggle and then look up the episode, though we did not throw ours out or get a visit from a fireman in the middle of the night... Click on the photo if you want to see the clip! 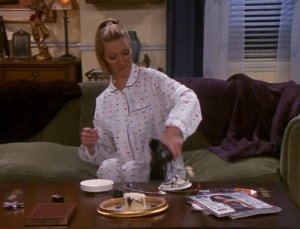