Cardinal Jorge Mario Bergoglio will from this day forward be Pope Francis, the 265th successor of St. Peter. The little part of me that was hoping we'd be surprised is quite pleased. I understand that he was the second contender at the last conclave, but the "experts" thought his age would keep him from consideration this time. Get to know a little bit about the new Holy Father at http://www.catholic.org/hf/faith/story.php?id=50111. (Again, not sure how to hyperlink from the Blogger App - anyone know?)

Pope Francis, a Jesuit priest, is 74 and is the Archbishop of Buenos Aires. So many firsts for the papacy: first Jesuit, first Argentinian, first American, first Francis! Exciting times, exciting times...open the windows and breathe in that fresh air of the Holy Spirit!

I am hoping that with so many new firsts, people will not go overboard with their speculation about major changes in Church teaching as relates to the standard hot button US issues. Clearly there are bigger fish to fry... Poverty, war, religious persecution, not to mention a waning spread of the Gospel. To quote Cardinal Hume, "I suspect that it is a trick of the Devil to divert good people from the task of Evangelization by embroiling them in endless controversial issues to the neglect of the Church's essential role, which is mission." Let's keep our eyes fixed on Jesus in prayer for our new Holy Father, who faces turbulent times ahead to be sure. Viva il Papa! What a World Youth Day to come in Rio - was the Holy Spirit working overtime, or what?

In other news, when Li'l G woke up from her nap and I told her we had a new Pope named Francis, she wanted to go see him. Yes baby girl, we certainly should go see him. Anyone want to send us to Rome?? 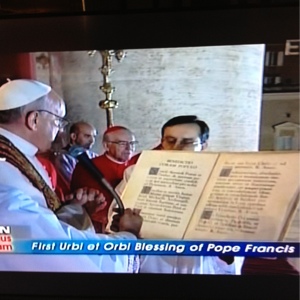 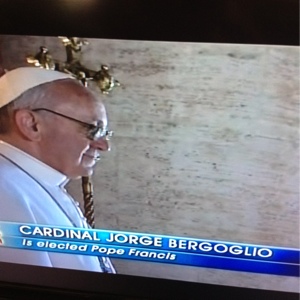