I'm just going to cut to the chase this week - no snappy intro! 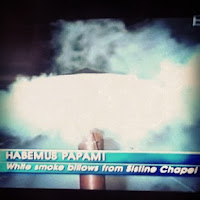 1) Habemus Papam! I mean, how can I not lead with that? (And yes, I am the nerd who sat fixated to the television, camera in hand to be able to capture the moment through teary eyes. I'll admit it, I was a little emotional.) I've already written quite a few thoughts, so I'll not write too much on this one. All I can say is that the more I see, read and hear, the more easily I can see the work of the Holy Spirit. In reading around the Catholic blogosphere (is there a more trending topic among Catholic blogs this week?!?), I see many reactions. Some are rejoicing that so many new firsts may mean significant changes - this is probably true, though not in the way some mean, especially the MSM. Pope Francis has been clear that the deposit of faith is the deposit of faith. In contrast, some are trepidatious that his will be a very different papacy, and downright vitriolic about it. 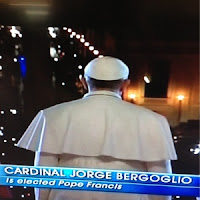 Both reactions make me giddy with joy at prayers answered! I have a feeling Pope Francis is going to shake up our human understanding of what it means to be Catholic, with an unyielding witness of radical love for the marginalized reconciled with an unyielding proclamation of the Gospel message and God's plan for life, love and freedom in Christ. He will challenge us to live as true disciples with a witness set apart from life as usual and church as usual. As I said in a previous post, I'm so thrilled that the Holy Spirit shook things up. If I'm thrilled, I can't imagine how excited Sherry Weddell and the Catherine of Siena Institute must be (mostly Sherry). Our own Li'l G was pretty darn cute - when she woke up from her nap right after all the hullaballoo, I told her we had a new Pope whose name was Francis, like the saint she liked to read about. She said "Pope Francis? Go see Francis!" All right, kiddo, let's go - any generous donors willing to send my Li'l G with her family to Rome??
2) Speaking of Sherry... Must reads that I'm working through, especially in light of the white smoke: Forming Intentional Disciples by Sherry Weddell. If you ever have a chance to attend a Called & Gifted workshop with her, I highly, highly recommend it. Sherry's work inspires a similar reaction in me as that mentioned above.
Works of Mercy by Mark Shea. As I said, part of this blog will be evolving into helping us to live out the call to works of faith in the corporal an spiritual works of mercy.
(Interesting note: Sherry and Mark both came into the Church in the same RCIA class at Blessed Sacrament parish in Seattle. The Holy Spirit was up to something, and working efficiently!)
Hubbers tells me the last one to add to my list is Evangelical Catholicism by George Weigel. He's convinced these three books may be foundational in how we move forward as a church. Though I'm still making my way through them, I tend to agree.
3) We are into a terrible sleep pattern with baby J. I'm not sure if we are teething (likely at almost 8 months), but we have yet to sleep through the night. Most nights I end up holding him a good number of hours more than I should. I know it will soon end, but the result is that I am bit sleeping and feeling the repercussions.

4) One repercussion is a short fuse. I hate that the littlest annoyances threaten to send me over the edge these days. That is not the mom I want my kids to know or remember, or the kind of wife I want to be. I do pray more in those moments, but it isn't the quality of prayer I had before. Sometimes I feel trapped in a cycle of exhaustion and outbursts with no end in sight, and I feel like the biggest spoiled drama mama around. I have help. I have good kids. If you look at my house, it's not like my family demands white glove care or expects home cooked, gourmet meals nightly. I still lose it and wonder how our moms did it without taking to the drink. 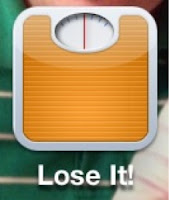 5) I'm beginning to get to that age where I worry about my health and my weight beyond just feeling like a fat cow who doesn't look cute in anything. My best friend from college tipped me off to an app which I like better than anything I've used. It's called "Lose It!" and has an orange scale as the icon. Admittedly it's not even been a week. Here's what I love so far, though. First, it's free. Second, you can enter just about any food, or scan items, and it will give you the caloric info per serving and track it. Third, it gives you options for weight loss goals and bases your plan off how much weight you want to take off and how quickly you'd like it gone. It's pretty much modeled after Weight Watchers online tracker, but purely caloric and not points based. You can upgrade for a fee for more planning tools, but so far I'm liking the free version. Next up: the dentist and a physical. Check back in the fall. ;) 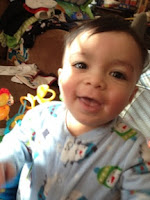 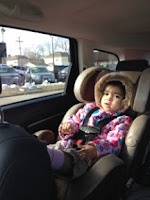 Li'l G singing hymns and praise. Love hearing her little off key voice belting "your grace is enoooough" from the back seat or "el shaddai" as I'm singing to her at bedtime. 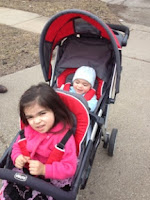 7) So.ready.for.spring. Bring it! Walks and open windows, more road trips with the kids during the day...yup. Ready! Also starting to get the spring cleaning bug, but wouldn't mind having the kids out of the house for a couple days to be able to clean uninterrupted. Any takers? I'll swap, too! :) 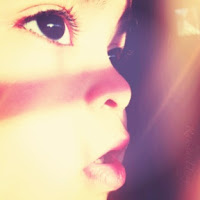 And one last picture for the week.