Five Faves: Memories of My Father

I was going to write a sappy Father's Day post about all the lessons I learned from my dad, but being behind in so many things, it never materialized. Then I was going to title this post "My Dad Can Beat Up Your Dad" but well, totally not true, and I'm not one to instigate nonsensical violent trash talk that is pointless. Now if it had a point, well...

Instead, I realized Hallie's Five Favorites link up was a great and quick way to reminisce on the lessons I learned from my dad, who has been gone now over sixteen years. Sixteen years. That seems like a lifetime. In some ways it is. It's a whole person who can drive! In other ways, it seems like just the other day we were driving to the clinic, not expecting to say goodbye. I really don't know which is easier - to have time to say your goodbyes but watch someone suffer, or to know that a loved one didn't suffer, but have what feels like eternal loose ends. Between the Hubs and I, we've experienced both scenarios, and I think in the end, none of it is easy. We are still left in this world missing someone. Let's not even get into the theological complexity of the fact that my parents are not Christian. That's a discussion for an entirely different time when I have far more brainpower and time. So, while this is a day late and probably a whole lotta dollars short, for now, here are five lesson I learned from my dad.

1) Work hard, don't complain. (Clearly I didn't learn this one fully.) My dad was a hard, hard worker. It was in his blood, no doubt because he was the oldest of eight and helped raise his siblings in some way. He put himself through school - the stories are etched in my mind about him learning the ratio of rice to lentils so he didn't end up with a week's worth of food in one day as he was fending for himself. That frugality extended into our family life as he would always question whether we needed something or wanted it. He always felt a responsibility to continue to support his family even after my parents moved to the United States. He was up at dawn, and I still remember days when he would go back to work after dinner. Even when he was not treated well at work, he didn't complain - I only learned of some of those things later from my mom, who complained for him. No matter how hard he worked, he did, however, make time to come home for lunch and dinner. The beauty of living in a small town. 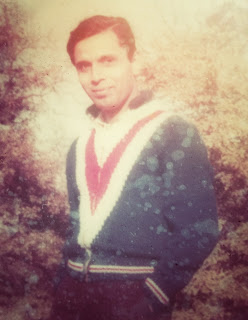 2) Family is important. Like I said, even well into my later teens, I remember my dad always wanting to support his family back "home." In Bengali, the word was "desh," meaning country, really meaning home country. Providing for us was something that was deeply embedded in his soul. I remember just once suggesting that I would work to save money to study abroad, and though I had no intention of suggesting he couldn't manage it if that was what I really felt I wanted to do, that was how he took it. I had never seen him so upset. He always provided for us, even though he may have always told us we had no money. Only upon his passing did we realize how much he wanted to provide for us in a lasting way, even after he was gone. Regardless of how much he worked, he made sure he spent quality time with us. There were days that he would go back to work after dinner, but he was home for dinner. He was at my recitals, my awards ceremonies, helping me with homework, calling home every night before bedtime if he was away on a business trip, etc etc etc dot dot dot. He was first a husband, father and son before he was anything else. Sadly, some of that connection to family died when he did, but thanks to Facebook, I've been able to reconnect with some of my cousins from his side of the family. I never once considered that while I grieved my father, they grieved their son, brother, uncle and friend. For that I am sorry and have only youth and grief to blame.

3) Put others first. My dad was famous for letting himself go without so he could give to others. It was so ingrained in him to go without, that my mom would literally have to take ragged clothes out of his closet and dresser and put in new ones, or he would go around with tattered clothes. Seriously. We always had people over for holiday dinners who were without families to celebrate with, and even hosted young people with developmental disabilities for several years. Giving to charity was always a big part of our family budget, especially at Christmas, and I remember being included in the decision making as I got older. I learned to think of others and be thankful for what we had, even through the many selfish phases of life.

4) "No problem!" To those who knew my dad, this was his defining phrase. So much was this his defining catch-phrase that when our neighbors went to the Bahamas, they got him a t-shirt that said it. Being the 80s, it was aqua with hot pink writing. Needless to say, I did not let him wear it much. Part of his nature in putting others first was also having a hard time saying no if someone needed something. Every gift has a shadow side, and I'm learning to dial up the "no" into my adult years before I reach burnout. Yet, this was my dad, and he never complained about burnout (see #1). :) 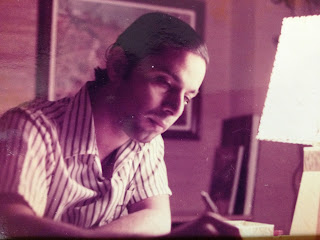 5) Gender isn't everything, but it is something. Being an only child, I was my dad's son and daughter. Let's call me a tomboy princess. I equally enjoyed digging for worms and fishing with my dad, while later playing dress up and having a tea party or playing house with my dolls. Sports...well, that's never been my gift, but in all other ways, my dad never treated me like there were things I couldn't do (other than play chess...apparently girls did not play chess, even if they dug up worms). I worked with him in building and fixing things around the house and then snuggled with him as his little princess. I enjoyed my bike and fishing pole just as much as my Barbies. Later, in my teenage years, he would be the one who taught me to drive, instilled a love of a good camera, encouraged me to take more math and science (even though it really wasn't my strongest suit), and would be dismayed when I tried too much crazy makeup. He was the one who always reminded me that God had already made me beautiful and I didn't need special clothing or makeup to improve upon that. He taught me that God had already instilled in me an inherent femininity which I should embrace, but rarely let that limit my interests and hobbies.

I see so much of my dad in my husband now, from quirky interests to the way he looks at his children, and I miss him terribly. I see his grandchildren who will never know him outside of the stories and pictures they see and hear, and I miss him terribly. I think of all the work we want to do on the house, and how much he would have enjoyed small projects, and I really miss him terribly as we think about having to call contractors! God hears from me often about how unfair I think it is, but He reminds me that he does what is best for each of us in our circumstances, and I know that He took my father out of great mercy, so I move on. I pray that dad had a chance passing into the next life to see and believe in Christ, and that he is now in His company or at least on his way there. I hope very much to see him again one day, and know that at least he sees us now. This one's for you, daddy...