Come Away With Me

“Isn’t funny how day by day nothing changes, but when you look back, everything is different…” C.S. Lewis

My birthday is coming up next week. As the threshold of a new year quickly approaches, there can be some inclination toward a wee bit of self reflection as well as thoughts on how to celebrate. This year, I want to celebrate in part by extending an invitation to come on retreat with me and over a hundred of your closest lady friends, dear moms/wives/sisters/friends December 7-8 in Ann Arbor, Michigan!
Once a year the Dominican Sisters of Mary, Mother of the Eucharist in Ann Arbor host a non-discernment retreat for women, focusing on the married ladies and mothers (though one need not be married nor a mom to attend.) You may have seen them on Oprah a few years ago. Perhaps you saw them on the CBS Morning Show recently as their CD has hit the top of the classical charts on iTunes and Amazon. Founded in 1997 with four women (Mother Assumpta Long, O.P., Sister Joseph Andrew Bogdanowicz, O.P., Sister Mary Samuel Handwerker, O.P. and Sister John Dominic Rasmussen, O.P.), the Sisters have quickly grown to over 110 women in just sixteen years. Most of the retreats hosted by the Sisters are discernment retreats for young women (the next one is November 9-10 in Ann Arbor). With just one non-discernment retreat, spaces fill quickly. Last year, I barely made the cutoff - I'm fairly certain I ended up registering on the last day before they began a waiting list.
This year, I registered early. While I struggle to make time for myself, I wasn't about to miss out on this retreat!
As I was looking back at my notes from last year's retreat, it is awesome, in every sense of the word, how much difference one retreat and time can do. When I drove up to the retreat last year, I was four months into being a mom of two, a year into a new job, three years plus into marriage and very lost. I went by myself which, even for me, can be intimidating, and even more so when I was feeling predominantly invisible and empty. I was in need of healing, in need of sustenance, and I received that in so many ways. From the women who adopted me in the 4 a.m. Adoration room (who I am able to stay in touch with through the blessings of Facebook and looking forward to seeing again in December), to the uncontainable joy of the Sisters, to the peace of the Eucharist in Adoration (even if it was at 4 a.m.), to the stories of so many women who were also broken and seeking God, I received all that I was seeking, even if it didn't present itself in a miraculous, overnight transformation.
Here are some gems from last year's retreat:
There was far more, but I want you to come along with me and experience it for yourself! Again, the retreat is not until December 7-8 of this year. I know, it is months away, but spots fill quickly so you have to plan ahead for this one!
Thanks to the generosity of the Sisters, I have the opportunity to offer one lucky young woman a free registration for the retreat. So, enter away ladies - the giveaway ends next Thursday. I hope to see you in December on retreat! 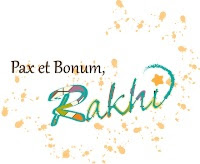 PS - Contest starts this Thursday at the stroke of midnight!

a Rafflecopter giveaway
If you enjoyed reading this post, follow The Pitter Patter Diaries on Bloglovin!
at August 28, 2013