The Pope is Heading to Prison?

Sherry Weddell posted on Facebook, "Pope Francis will spend Holy Thursday in prison." She is quite right, and quite adept at getting your attention! The Holy Father will be celebrating the Mass with prisoners at a juvenile detention center. It is no longer business as usual at the Vatican, though I hardly think we can feign surprise at this point. Not a church of and for the poor, huh? I have a feeling much is about to change in the public image of the Church with the Holy Father getting his own hands and feet dirty for Jesus (and in example of Christ for us). [Insert the Catholic Lenten "A" Word here. Not the one that rhymes with Mass. The one that rhymes with BalletMooYa.]

Here's the article from Vatican News: 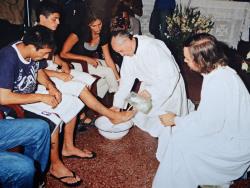 Pope Francis to celebrate Holy Thursday Mass at juvenile prison
(Vatican Radio) It was announced by the Holy See Press Office on Thursday that Pope Francis will celebrate the Holy Thursday Mass of the Lord’s Supper at the juvenile prison 'Casal del Marmo' in Rome, the same facility visited by Pope Benedict XVI in 2007. The Mass of the Lord’s Supper, which commemorates the institution of the Eucharist, also features the rite of the washing of the feet. In his ministry as Archbishop of Buenos Aires, Cardinal Bergoglio used to celebrate the Mass in a prison, hospital or hospice for poor and marginalized people. The other Holy Week celebrations are expected to follow the schedule already released by the Office for Liturgical Celebrations.
Read more at The Deacon's Bench...
at March 21, 2013