Mother Teresa was quoted as saying, "When choosing between being right and being kind, always choose kindness." I don't think anyone could accuse the saint of Calcutta of either being heartless or compromising the Truth. She embodied both kindness and righteousness.

As I've watched Facebook explode in red from all angles today, I've felt extremely uneasy. My stomach has been in a knot (though not enough to prevent me from shoveling food in my mouth). I wasn't quite sure what the source of this unease and sadness was at first.

Some of may assume it was from the number of people changing their profile pictures to the icon in support of same-sex marriage. Others might assume it was in realizing that the church may be fighting a losing battle. Still others might think it was due to the injustice people face in not being able to share the same "rights." Really none of those were at the heart of my discontent.

As I was praying about what was really tugging at my soul, and what I might have to say that was any different from the arguments that were already saturating the Internet, Mother Teresa popped into my head. I have a real love of this woman who loved the untouchable and seemingly unlovable in the city of my parents' youth. Her intimate knowledge of Christ and resulting wisdom has never steered me wrong. Tonight is no different.

As her words came to mind, I realized two things. First, we have in large part forgotten how to be kind to one another especially in the midst of disagreement. Second, we forget that issues that relate to the human person actually involve human persons with feelings.

How disappointing to see the vitriol that circulates on the Internet. It is too easy in the world of faceless, bodiless communication to retort in sarcasm, anger, ignorance and hate. That goes for all sides of an issue. I would dare those who use such tactics to do so face to face. I'm quite certain we'd have a different game altogether.

For those of us who profess kinship with Christ, the call to be kind goes so much deeper than mere politeness. Jesus came for the sick. We are all broken, beaten, sick and downtrodden without him. It is unfortunate that some people's brokenness becomes fodder for public debate while others of us go unscathed. Yet, Christ reminds us he desires mercy. If we cannot convince the other that we love them beyond ourselves, then no amount of argument or correction is worth the breath or ink that is used. Love must come first. This does not mean we must not stand firm in the Truth we've been given, but it must be shared in the context of a loving relationship. Love comes first.

On the other hand, simply because one does not agree with the current vocal trends of the culture does not make one hateful or a bigot. I can disagree wholeheartedly with what you are doing in and with your life and still love you to pieces. If we abandon kindness, well, that claim is a little harder to make. Again, love comes first.

There are people living day to day the issues we are discussing - they are not nameless and they are not faceless. They most certainly are not heartless. We only inflict pain if we talk as experts on struggles we do not face. Get to know who it is you're speaking about. Take on their pain as your own. Then show them the joy that exists in breaking through the darkness of pain and letting Light in. It is what Jesus did when he took on human form, and it is what we must do if we really want to enter into a meaningful discussion apart from icons, banners, soundbites and propaganda. Love must come first. 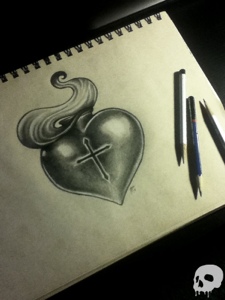