The Hubs and I have been blessed to be able to be away over the last couple of weekends to go to some Catholic conferences. Last weekend we were at the Charism School at Christ the King in Ann Arbor (which I wrote about here), and this weekend we were at the Michigan Catholic Young Adult Conference in Lansing. In my former life as a young adult minister, I was rather involved in the planning of this conference. Since the littles have come along and I've stopped working in full time ministry, my involvement has...waned, shall we say? I'm quickly aging out of the young adult bracket as well, as I crawl toward the big 4-0, too, so this was a bittersweet year for me as I approached the weekend. God always has better things in mind. What we approach with sadness or fear, he turns to joy and peace. This was no exception. 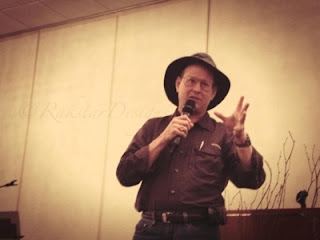 We had the honor and privilege of having Steve Ray (aka Jerusalem Jones) as our keynote speaker. If you don't know of him, you really should check out his work. His conversion story is pretty amazing. What struck me most about him, though, wasn't the utter wealth of knowledge he possesses, which he does. In listening to him speak, what really amazed me is how much God prepared Steve for His purpose in His time. All the experiences of Steve's life added up to what God was calling him to do. His parents' life and conversion, being raised and trained in the Baptist tradition, the friends he had made...everything led to him being who he is today and what he is doing for the Kingdom. This struck me as especially poignant at a time in life where I'm not always sure what God is preparing me to do or where I belong. Clearly there is a grander plan that is perfect in His time and purpose - I just have to be faithful to what He is calling me to today, big and small. Additionally, we had been trying to book Steve for the conference for three years and something always interfered. I think God was using those who came before Steve to plow the field to make it ready for the message he brought this weekend (along with Bishop Boyea of Lansing and Bishop Cepeda of Detroit). It is one of being on the offensive in our discipleship and armed for our mission of bringing souls to Christ, of reuniting them in love with their God, who loved them so much He gave His life for them. I'm not sure we would have had an audience ready to receive that fully three years ago. 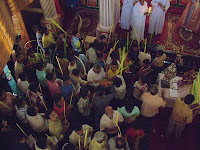 Outside the realm of talks, the Hubs and I were also fortunate enough to be sitting right next to Steve's vendor table, so we took the opportunity to introduce ourselves and chat with him a bit throughout the day. There was one part of the conversations that really struck a chord with me. Steve and his wife have raised four children and have eleven grandchildren (as of now). He was sharing stories about parenting and mentioned a bit about the teenage years. His advice? Raise rebels, but raise them to be rebels for Christ - that's what's truly rebellious in our culture anyway. The years ahead will bring our children many temptations to think they are rebelling when in fact they are just going with the crowd. Don't be afraid to steer them in a rebellious direction arming them with morals and faith. Find them their own rebel army - surround them with friends who will rebel with them and hold each other accountable. Most of all, don't be afraid to be firm - just give them faithful alternatives and always help them to see the truth. Tall order, but one that is really pretty exciting! Who doesn't want to raise a rebel army?!?
This means, of course, that we ourselves have to deepen our faith and stand firm in the truth handed down to us. We need to be intentional about strengthening our friendships with those who are also firm in their faith and raising their families that way. We have to do all this without locking ourselves in a Catholic bubble or living in fear of the culture and the people in it. We have to prepare our children to eat with the sinners as Jesus did to share with them His love and His kingdom (and realize we all fit that bill). We have to be willing to do this ourselves so our children see and understand their identity and role as God's children, and the dignity all people were given created in the image and likeness of God.
Again, it's a tall order, but we absolutely cannot settle for less. There are too many people who wander lost and broken in this world not knowing there is One who has already shed his blood to save them and restore them to the glory of God. What a perfect message as we approach the season of Easter!
Happy Palm Sunday and prayers for a blessed Holy Week!!