Playing Catchup: The Trifecta - Part I

It seems my life these days could best be summed up with one phrase: catching up. Whether it is on work, on my reading, on more time playing with the kids, on cleaning the house, cooking, working out, taking care of my health...you name it, I'm probably behind. Being a Type A personality, this sends me into a little bit of a crisis, to which my response lately has been to just shut down. Not good. Well, here I am trying to catch up on a little writing and work my way out of that hole!

Part One: From Meltdowns to Mama's Lap 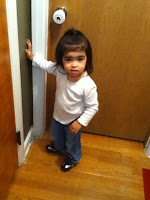 A couple weeks ago I was having a particularly rough evening home alone with the kids. Between the two of them, I had heard whining or crying for an hour straight, and with the both of them crying at once for what seemed like at least a half hour (in reality probably ten minutes). Lil'G was basically reaching her end for the day, and Baby J was hungry yet again. So rushing to grab a bottle and calmly remind the daughter that no, in fact, just because it was near bedtime she could NOT play with daddy's books, the television or countless other forbidden fruits, I admit I glanced at the bottle of wine in the refrigerator. I closed that door, though, and opened the front one and stepped out for a breather while the whining went on. It's amazing what a quick breath of fresh (and thankfully cool) air can do. 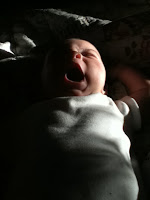 Once I came back inside and sat with Baby J and his bottle, Lil'G seemed to calm down as well. As long as the whining had gone on, it seemed that almost instantly it disappeared and with it all traces of commotion. G climbed up on one side of my lap with little brother nestled in drinking on the other, and in a nanosecond we'd gone from meltdowns to quite a sacred moment of snuggles. Though I was frazzled from the mayhem, that instant turnaround to sweetness dissipated whatever frustration remained.

Isn't that my own relationship with God? I fight and I fight, and then, when I find an opening I snuggle in close, and we both just sigh in relief and love on each other. Lesson one: fight less, snuggle more.
at September 18, 2012